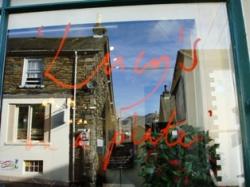 Whilst staying near Penrith in the Lake District, one of the management team at the apartment complex where we were staying, on hearing that we were moving on to Ambleside, suggested that we really should visit Lucy’s when there. Lucy owns a number of foodie businesses in the village and wider, as you will see from her website link above. We decided to go for the more formal of her restaurants, Lucy’s on a plate, having said that the atmosphere in the restaurant is informal, comfortable and very relaxed. We entered the restaurant into a large welcoming reception space. We were then led to our table, having been given a choice of eating in the main dining area or the conservatory, we chose the latter. The restaurant as a whole is furnished with solid wood furniture that has a rustic feel adding to the relaxed homely atmosphere that has been created.

The menu, which is personalised, greeting all those who have booked for the evening, lists its extensive range of offerings, each having been given slightly quirky names. Starting with the ‘Pinky Partridge’ and the ‘Chicken Licken’ two good sized dishes arrived at our table. The partridge had some six or more fairly thickly slices of tender, pink breast meat, that had a great flavour, sat upon a tasty buttered onion mashed potato which together with the white wine and mushroom sauce complemented the meat well. The chicken, three chunky fingers of chicken breast, deep fried, but not at all greasy, were moist and juicy when cut into. Perfectly cooked the chicken was paired well with a garlic mayonnaise and accompanied nicely with a small mixed salad.

Moving on to mains, the ‘Blushing Bambi’, medium rare venison haunch steak, was pink with a good texture and some bite, some good dauphinoise potato and roast, cubed butternut squash, completed the dish, and worked well with the meat, as did the red wine reduction drizzled on it. The ‘Perfect Piggy’ comprised pieces of pork fillet, split, filled with prunes, and wrapped in Serrano ham; these had great flavour, and were served with roast potatoes, carrot and swede puree, and a slightly over-generous glaze of balsamic vinegar and herb oil.

Having thought the starter and mains lists were extensive, the dessert menu was enormous! It took us several minutes to read through and decide what we would like. However, we did get there eventually! The rhubarb and ginger crumble was a must, as was the spiced Cumberland bread pudding. The crumble was fruity with a crunchy topping and was served in a big bowl with some creamy custard, in anyone’s book it was a great helping of home-style comfort food. The bread pudding, light in colour, but fruity and well spiced was paired with some decadent rum butter as well as a scoop of a good vanilla ice cream. Each of these made excellent finales to our individual meals.

Service at Lucy’s was both efficient and very friendly, Lucy herself visited tables during the course of the evening to ensure diners were happy and enjoying their meals. The restaurant has a reasonable wine list including a selection by the glass. It is a popular destination for both locals and visitors alike. Having gone there on a Monday in October most tables were taken up by customers, so if you are intending to go there we would recommend booking in advance.