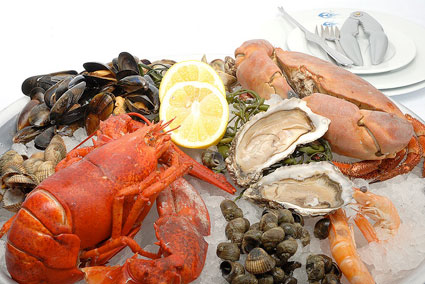 They’re going to rename my home town of South Croydon to ‘Malcolm John’s South Croydon ‘I reckon, his empire is spreading so fast. His French restaurant ‘Malcolm John’s Cassoulet’ has already won hearts and stomachs in the area and now he’s opened another place, ‘Malcolm John’s Fish and Grill” about 400 yards away. Quite possibly he has a secret tunnel linking the two so that he can get back and forth, plus a helicopter to travel to his Vacherin in Chiswick..

It’s a bit of a secret to find because despite being on the main road it’s been camouflaged by some temporary scaffolding whilst work is done upstairs, but when that’s gone this double fronted place will stand out. It’s already standing out for its offer, a dead simple, credit-crunch friendly family deal that specialises in, well in Fish and Grills basically. To ram the point home there’s a display of fish and shellfish on ice to prove freshness and provenance from mostly the south coast of the UK. The meats, and there is a good choice, are sourced from the south east and the excellent bread with its fantastic crust comes from Dulwich. So there are quite a few foode boxes ticked already and we haven’t even sat down yet.

It’s a large space, but cosy and with menus serving as place mats on bare tables. This style isn’t going to scare any Harvester fans. Nor is the menu, which is familiar and comforting. We shared a bowl of anchovies, artichokes and olives that had delicious snow white fish and dark olives whose stones cheerfully dropped out with just a squeeze, plus of course some of that great bread. A proper starter of crab salad with baby spinach was quite a bowlful. The crab was beautifully fresh and sweet but overpowered slightly by the dressing that it didn’t really need. Someone had also been a bit heavy handed with the salt but that’s easily rectified. The wife had scallops and spinach gratin, served in a shell for that ’70s touch, and the scallops were well caramelised but tender inside..

Fish here comes on the bone and that’s a good thing. Okay, it may trouble people unused to cutlery and dear old Croydon does have a fair few people who eat with their hands, but the flavour is far better. The wife’s Dover sole was perfectly cooked and slipped away from its bones to be dunked in a decent tartare sauce. A small bucket of proper chips also got the cheerful dunking treatment. Calves liver, mash and bacon is a classic I never tire of and here it was done right; pink in the centre and frazzled on the outside. The bacon was a bit salty though and the onion rings, although perfectly nice, seemed to have come from a parallel dining dimension style-wise. The mash was creamy comfort food and lapped up the gravy like I did.

Puds didn’t disappoint – an apple crumble that was tart with Bramleys and tasty too and topped with a crumble that was good and sticky, and not the sawdust some places try and pass off. That great British dessert of Bread and Butter pudding made the wife happy, although she reckoned ice cream was too poncey and a big jug of custard would have been the right thing to go on top.

With a selection of classic dishes built on the basic of excellent ingredients and clear, simple cooking, it’s a restaurant that seems dead right for its time both taste and price wise. Watch out for the open air car park opposite though, the sneaky council have made it 24 hour but put up no signs to say so, hence my getting back to a £60 fine for a few hours post 8pm parking. When Malcolm is eventually made Mayor of South Croydon, I trust he will fix that.