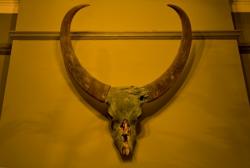 The last time I ate the type of food served at the newly-launched Mall Tavern, Thatcher was battling the unions and Callaghan hanging up his hat. This time, as Cleggy-boy dazzles the nation, another hat-wearing impresario is making an entrance.

Chef Jesse Dunford Wood is clearly excited by The Mall Tavern’s opening. He bounces around the tables in his panama hat, looking quite the Bright Young Thing. In fact, were the diners more glam than smart (but just as monied), these could be Agatha Runcibles and Miles Malpractices stalking Waugh literary territory.

The gastropub, says a French Young Thing next to me, is so much better than its predecessor, ‘which was bright and white”. Beautifully-turned out, the new décor is all mossy walls, reclaimed Victorian furniture and chandeliers.

The place is the Perritt Brother’s third venue whose portfolio includes The Regent in Kensal Green and The Stag in Hampstead. But this is Jesse’s first venture and he’s loving it.

It’s pub food here and the tendency is to fun, old-skool stuff that we ate in the 1970s. Think Findus pancakes. ‘It’s nostalgic. I love the word nostalgia,” pronounces Jesse, dreamily, when asked about the theme. He’s full of anecdotes and a sprightly step. He’s also older than he looks, this art school kid, whose background is evident in his choice of interiors. Pictures by his father – the painter Hugh Dunford Wood – adorn the walls and Jesse seems very proud of his dad.

The menu attempts a culinary canter around Britain. Here’s the smoked salmon fishcakes with lava bread as a wink to Wales. Here’s the colcannon with the pork chop, the Cornish fish soup, the bits and bobs. And it changes daily, splitting into ‘Great British Bar Snacks” and mains. The snacks can be little, like the way-too-tough pork crackling strips with Bramley sauce we had – not good, or good if you think the ’70s were bland. Or you could get Welsh lamb strumpets which were lovely, if deeply unhealthy, cheaper cuts of slow-cooked lamb, rolled into cylinders then deep-fried in breadcrumbs. Good comfort food.

But the cauliflower fritters with curried mayonnaise felt like a kitchen experiment. Or was that the idea? Was this a 1970s attempt at Indian exotica for Abigail’s party that was meant to be off mark? Who can tell? Garish orange florets, missing the delivering spice, with a Coronation chicken-style dip? Our favourite starter by far was the soused herrings, beetroot and sea purslane – see – much better for not being novelty. The sweet and sour herrings were deliciously offset by the beetroot tang and colour-contrasted with the delicate little eyes of purslane. What an inspired trio. The soda bread – just £1 a pop and baked onsite – was very good too.

We were drinking a very nice appley Les Vignes de Eglise, Vermentino at £5.30 for a large glass which helped cut the fat of the mains. G’s Cow Pie was a witty heifer of a beast. The marrowbone in the middle let the steam escape into a crumbly jumble of marrowfat and the beef was tender and winey. Wasn’t sure about my chicken Kiev, hash brown and coleslaw – all staples back in the day. A bit of a mix – the Kiev, like a giant Scotch egg, was good with excellent butter. The hash browns were very nicely flavoured with thyme. But the accompanying drumstick was dry and tasteless, sadly, and the coleslaw sans mayo while a health boon, had dressing too sugary to withstand the garlic.

Inter-dish we had a sneaky jammy dodger and a couple of Garibaldi biscuits which were entertaining, especially as our nice waiter – Jean-Paul Gaultier’s doppelganger – gave us the lowdown on every item’s history. But my Arctic roll for pudding was way too flavoursome with its boisterous jam to taste authentic, and also the Welsh scrumpets were taking their toll by now. It was time to say no.

So, all in all, we enjoyed. There did seem to be a tendency to fritterise… were the ’70s solely a decade of breadcrumbs? But Jesse’s keen, the place is rammed, the menu keeps changing and everyone looks jolly. It’s fun, reasonably-priced and will surely draw votes this election.