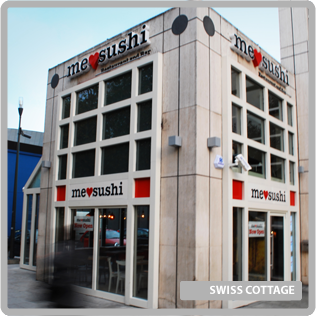 Me love Sushi – I don’t generally, though J – my friend and dining pardner for the night, swears by its protein content. So away we tubed to Swiss Cottage on a miserable, rain-blasted evening to a Brutalist restaurant whose sheet glass windows leaked in all that cold.

And yet – so Eastern block minimalist but so… we love sushi. Grand groups, local families and cosy couples were tucking in merrily, dissipating that bleak London pallor.

On one side, first dates – she a 45-year-old peroxide blonde with a butterfly clip, he, gangly, louche with the wild curled hair of a mid-rate conductor. Behind us, a giggling, well-heeled couple. On our table, a pair of violent pink cocktails, part of the cherry blossom festival which we were here to celebrate. This is running until 25 May in a sprinkle of Japanese restaurants across the capital including me love sushi. So we had two Akashi-Tai sake cocktails to aperitif our meal with raspberry and pomegranate juice which tasted fresh, clean as a whistle and readied our palates for the starter.

We chomped on the spicy edamame with chilli, garlic and ginger right through the courses because of all, they were the freshest, jumpiest little weasels, giving our palates kickstarts when the other dishes tired.

But the soft-shelled crab must have scuttled into a microwave before softly limping, sideways, onto our plates. It was a flop – poor thing – it died for this?

I loved the pickled Asian radish (oshinko), hosomaki – six little seaweed rolls of rice filled with pickle. They were compact, shooting taste out of the centre like a marigold bullet. Similarly, our sashimi platter – particularly the salmon – was lovely and fresh, like a slab of butter without the fat. We warmed to the prawn tempura temaki, a crispy seaweed cone stuffed with avocado, rice and of course, prawn tempura – a meal in itself well-balanced in flavour, texture, shading and nutrition. But oh dear, what’s this? There was only one special of the four so my dreams of tasting the signature black cod with miso were smashed to rubble as sesame seared tuna slid onto my plate. And yes, they did the job and were technically fab but there’s nothing like a girl’s cod dreams dashed in a place like Swiss Cottage.

There are three of these branches in North London at present though plans are to close the ones doing the North Circular route and bring them into Central London to more appreciative and lucrative customers. Our service was friendly and while I may not venture miles for this, I would if it were more conveniently located. And the prices – around £5 for a starter and between £2 and £7 for sushi, were very reasonable. We enjoyed.

By the end of the evening, the peroxide blonde had dispensed with the butterfly clip and spread a scarlet smear on her lips as he bounded back from the toilets. We, fulfilled and I – more enamoured now of sushi – made our way back to central N1 where we all know the sun shines brightly.