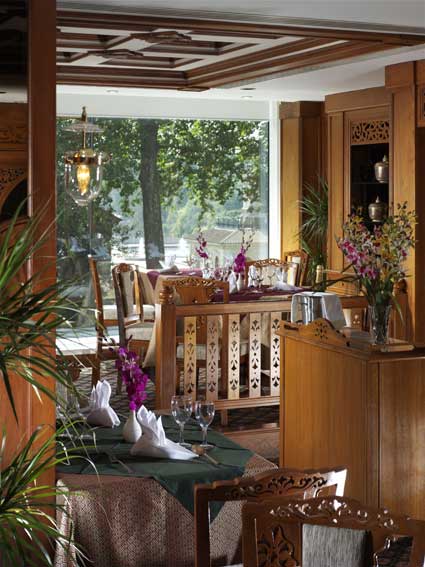 In my early London days I inhabited a subterranean bedsit just a few streets from Nipa. I had to leave when the police told me that the bedsit buried even further below mine was an S&M dungeon and, as it wasn’t the only one, the whole building was to be closed down. I had rather wondered why my neighbours were all a) women and b) had so many friends, but hadn’t thought too much of it.

I used to glance wistfully in at the door of the Royal Lancaster Hotel back then, it was well out of my price range as you might imagine, so it’s nice to be finally going through those big revolving doors, going up the stairs and getting lost. Where the hell is Nipa? A kindly maid sets me right and this is to be a theme. The staff at Nipa are so friendly, so at ease with each other that this is more like a family restaurant than a hotel one. Mind you not many family restaurants kit out the male waiters in fancy sashes nor have quite so much ornate wood panelling on display. The view over to Hyde Park is rather pleasant too. This is a comfortable place, sister in fact to Nipa in Bangkok.

Prices are comfortable too, a Crozes Hermitage at £27 seems pretty reasonable by most hotel mark up standards and dish prices aren’t too bad either with a set menu for two kicking off at £30 and looking to be a pretty comprehensive demonstration of what head chef Nongyao Thoopchoi, who has been there fifteen years, can do. Even so we go a la carte with a fairly unadventurous choice of starter of the Nipa mixed platter. Satays of course are a part of it; moist and well cooked they slide of the wooden skewers with ease ready to be dunked in a decent satay sauce. There are small steamed parcels of chicken with peanut that you wrap up in a leaf of iceberg lettuce and Kaseam Jongpitikrat restaurant manager advises us to place a piece of the birds eye chilli supplied into the centre. Pop the whole thing in the mouth, enjoy the flavours and wait for the chilli bomb to go off. Very nice and rather fun, with the chilli kick arriving at just the right moment to lift the whole experience. Spring rolls are fresh and clear of excess oil and small parcels of crab in deep fried wonton wrappers equally so. The fish cakes are a little rubbery but they seem to be bouncy everywhere I go, so maybe that’s just how they are destined to be.

Mains of a soft shell crab, my third in a week, is perfectly done with their crunch a little compromised by the sauce soaking in, but as it’s a spicy, tangy plum sauce, that isn’t a problem. Scallops in green curry I assumed would be swamped by the surroundings but the curry is light enough to balance them well and again the chilli quotient is judged perfectly so as not to have us gasping, just tingling, after. Little pea aubergines have crunch and typical bitterness, which adds an extra note of texture to the silken scallops. Stir-fried ribbons of beef with chilli and basil leaves have a richness that comes from a reduced sauce absorbed by just the right amount. Clarity of flavours, not the all too often hodge- podge served elsewhere, consistently marks out the food here and explains why Nipa is one among fifteen places in Britain to be given the ‘Thai Select’ award by the Thai Government for restaurants ‘proven to be performing to the highest standards of quality and cuisine.’ I’ll go along with that, definitely.

Desserts of fresh lychees and cubes of sweetened tapioca don’t disappoint either and it all adds up to a little find of a restaurant in a very unexpected location. It would be a shame to let the hotel atmosphere downstairs put you off ascending to Nipa because the combination of warm welcome, authentic carefully considered cooking and really rather reasonable prices mark this place out as well worth a visit.