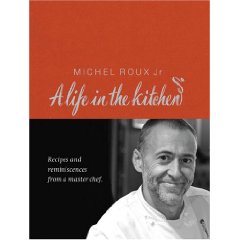 The lives of some of our better known chefs have become stultifyingly familiar. If I have to read one more time about Gordon Ramsay’s journey from failed footballer to global megastar or Marco Pierre White handing back his Michelin stars I’ll scream. Which makes this new memoir with recipes from Le Gavroche head chef Michel Roux Jr all the more welcome. Although he’s recently become a familiar and somewhat stern presence on our TV screens, making young cooks quake in their kitchen clogs with his no nonsense judging style on the BBC’s Professional Masterchef series, Roux Jr isn’t a headline grabbing kind of guy. As the book’s title suggests, his is a life lived out in the enclosed world of the professional kitchen rather than the glare of the public stage and is a story seldom told.        From a fondly recalled childhood spent growing up in 1960’s Kent in a house on the Fairlawne estate where his father (the legendary Albert Roux) worked as a private chef to the Cazalet family, to the revelation that he feeds his staff at Le Gavroche on deep fried potato peelings, the book is full of revealing detail. Animal lovers may want to skip the description his apprenticeship with the late, great French chef Alain Chapel which included learning how to dispatch live frogs with a pair of scissors and cooking up bags chicken innards, still warm from the hen.  A photo from the time captures the young Roux Jr mop topped and clean shaven with beer bottle and fag in hand and an affectionate arm around drinking buddy and fellow apprentice chef Ghent Van-Heche. It turns out that one of the most revered and respected chefs in the country used to be just one of the lads. Roux Jr doesn’t hold back on voicing his opinions. Of experimental Spanish chef Ferran Adria’s famous foams he says, Ã¢â‚¬Å“its not natural and its not right. You’ll never find a soda siphon in my kitchen. I think its just a gimmick.Ã¢â‚¬Â And he blames the loss of a Michelin star on the fact that Ã¢â‚¬Å“Inspectors and journalists are brought up on fads and fantasies so their view of fine dining is a specific one, and that’s why places such as Le Gavroche are no longer considered worthy of three stars.Ã¢â‚¬Â Ambitious preparations such as stuffed artichoke with foie gras and truffles are included in the book, but the majority of the recipes are achievable at home. Dishes like avocado and bacon salad with chilli or shepherd’s pie made with leftover roast lamb and vegetables are as delicious as they are easy to make.

Roux Jr makes passing reference to backstabbing colleagues and the sexually charged atmosphere of the professional kitchen, but if your looking tabloid thrills this isn’t the book for you. If however you want an insight into what it takes to be one of the world’s top chefs,  A life in the kitchen makes for a very satisfying read.