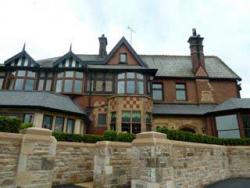 Lancashire fine dining places don’t get enough copy; Michelin-starred restaurant and country house Northcote Manor, to my mind, is one of these.

But why should sappy southerners care about chef patron Nigel Haworth’s gaff? Well, if there’s ever a time you’re motoring between Merseyside and North Yorkshire and fancy a break, flee the A59 and stop yourself in this bewitching corner.

It’s just had 11 months of Ã¢â‚¬Å“intensive renovationsÃ¢â‚¬Â with a refurbished restaurant, including a steel-and-glass chandelier, and veal-coloured silk placed on the walls. The service is as formal as the dÃƒÂ©cor Ã¢â‚¬â€œ perhaps because there aren’t many posh restaurants in Blackburn Ã¢â‚¬â€œ with poker-faced waiters whose perfect manners are a tablecloth’s sweep to old times.

On a quiet Monday, diners seemed to be those celebrating special occasions (and it’s not cheap, this place); guests diving off that A59 and possibly clandestine affairs, fascinating to watch.

We were trying the seven-course, more experimental tasting menu (there’s also a traditional one) because, if I’m going to travel this far, I may as well get the full Monty. Although if you’re starving, you’d better fill up on bread as these are dainty dishes.

After cocktails on a hot pink sofa in the lounge Ã¢â‚¬â€œ one aspect wonderful Bowland hills, one aspect car park, we began. Let me pick out a few courses.

The North Sea cod cheek Ã¢â‚¬Å“triple-cookedÃ¢â‚¬Â with malt vinegar & sea salt jelly, pigs head, black peas and dehydrated parsley (course two) certainly took some decoding. It was flaked brawn on a mini fish’n’ chips arrangement with a good crispy batter and little explosions of tangy jelly cube. The combination of flavours worked well but they masked the flavour of the fish; perhaps a turbot would have fought better against competing tastes. 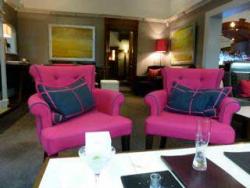 My favourite dish was local roe deer Ã¢â‚¬â€œ from the Bowland estates beyond Ã¢â‚¬â€œ with slow-cooked sweetheart cabbage and Yorkshire blue cheese, a relatively straightforward setup. The meat was incredibly treacly which counterbalanced the sweet cabbage and salt of the cheese.

Head chef Lisa Allen, apparently, Ã¢â‚¬Å“throws the cabbage in the oven for hours so it tastes really intenseÃ¢â‚¬Â, said a waiter. And yes, our cabbage was a sugary, pulpy paste. We saw the waiter’s mask slip Ã¢â‚¬â€œ a secret grin Ã¢â‚¬â€œ when, from hunger, we gannetted all the garnish, including the burnt, bitter outer leaves of the cabbage. Class.

I wasn’t fussed by the dessert, probably because of its name, until I tasted it. Chilled coconut rice pudding, Alphonso mango, Citrus chewits and basil ice seemed a bit of an anti-climax after six courses of elaborate dinner. But it was discourteously good and in fragments – intensely chewy mango bits and sorbets doing foxtrots on the tongue.

Each dish paired with a wine, such as a 2011 Tokaji Furmint, Dobogo, Hungary Ã¢â‚¬â€œ dry and complex with the complex cod Ã¢â‚¬â€œ and a spicy, bullish 2009 Numanthia, Toro, Spain, which should have been good given its £16 price tag for a 125ml glass.

After coffee, it seemed weird to suddenly be back on the disconsolate A-road having left such a box of formal, high-end dining. It’s good that among Lancashire’s witches, barmcakes and chippies, there’s another option. You know where to go now, you saucy, cheating things.