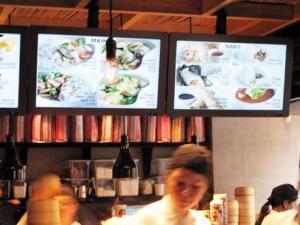 NOW is that what I call Chinese? It’s Chinese street food for the masses, who probably didn’t know they wanted it until now, not living on Chinese streets themselves.

They really do seem to want it NOW though; the queue is snaking out the door. There is no snake on the menu; no doubt someone thought that might not suit the tastes of a customer base largely dressed in Marks & Spencers’ suits.

It’s a take-out place but I don’t like taking-out, I like eating-in. Luckily there are a few stools and a thin counter to huddle against. Here you can carry your tray of cardboard packets and eat lunch with chopsticks and something bordering on decorum.

Unwrapping the packets is all very festive. What have you got? The Classic Dim Sum Basket – chive dumpling, seafood dumpling, coriander dumpling, spicy vegetable dumpling, chicken cashew nut dumpling. You want dumpling with that? Tough, have a Chicken Shu Mai instead. No I don’t know what that is either but it comes in the box.

Not bad at all, not the fine skin of high-class Dim Sum, nor the accurate pleating, but at £3.99 you’re not going to expect that. And they come away cleanly from the base of the packet, a thin-skinned Dim Sum (easily offended) would break down and where’s the pleasure in that you sadist?

Crispy prawn balls obviously call for a snigger about how big was the prawn, but after we’ve stitched our sides back up from this bout of witticism, we find that these side dishes (which look like clumps of uncooked tagliatelle) are rather pleasant, the initial crunch giving way to a moist morsel in the centre that’s plump and tasty. Two in a box for £2.29.

The duck rolls are quite small but at £1.69 a decent mouthful, the hoi sin sauce is a bit metallic however. The chicken rice pot could have done with a bit more chicken, but the rice is filling. It’s also a tad crunchy from being undercooked, but this is opening day, so hopefully they’ll get that right in future. 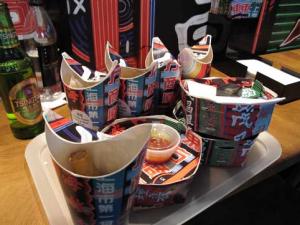 A range of salads is probably less ‘street’ than ‘avenue’, but healthy options are rarely what the masses masticate. The Beef and Lemongrass salad features great beef, but there’s a domination (a new critical term that I’ve just made up) of salad, which explains the reasonable £4.99 price tag.

The people behind NOW are the same ones behind Ping Pong, which some people cruelly deride as McDim Sum, although I’ve never actually seen a shooting in Ping Pong.

Authenticity anoraks aside, NOW offers ‘street food’ which has flavour and is fast and there’s plenty of choice from breakfast dishes onwards including a Chinese Porridge. You can also get a coffee and bun for just £1.99 in a ‘Chinese takes on Danish at elevenses’ style battle in the mean street that is Liverpool Street.