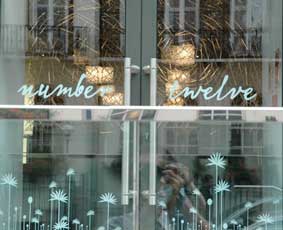 The clergy and food, what is it eh? Across the world priests of all denominations have been traditionally depicted as being as well fed and corpulent as a restaurant critic.

It shows in the names of dishes like the Middle Eastern Imam Bayaldi, ‘the priest fainted’; either at the deliciousness or at the thought of how much olive oil went into it. And here on Santino Busciglio’s excellent menu at Number Twelve are strozzapreti, or ‘Priest Stranglers’. Apparently so lovely that back in the 18th Century a priest choked to death as he greedily tried to eat too many.

Number Twelve is the restaurant of the Ambassadors Hotel. When the place first reopened the nearby Eurostar terminal wasn’t up and running, but now that it is the head count of lone male diners on business trips has gone up too. Why walk deep into town when you can get dinner and room on one easy receipt for the drones back in accounts to deal with? No reason at all, especially with food this good. Santino should be cooking in a bijou restaurant in Fitzrovia really but it’s to Number Twelve’s advantage that he isn’t. His calm, assured blend of Italian with a taste of British makes it well worth overlooking the hotel dining room’s inevitable coldness, which the friendly staff does a good job of warming up.

The strozzapreti are a starter; little rolls of home-made, egg-free pasta with a roughness of texture that is comforting on a cold night and which picks up the sauce of aubergines, basil, tomato and ricotta well. It has bulk without mass, so that it slips down with ease leaving room to fit in some more of the restaurant’s home made bread dunked in their good, peppery, olive oil. Thin sliced smoked Gressingham duck breast (smoked in the kitchen) is meltingly tender, the ticklish aroma just right. There’s no fat on or around it but even so the sharp citrus slices served alongside do their work to create great contrast in the mouth. Micro salad leaves and mint complete the picture.

For a main we had the Cornish line caught Sea bass which, for once, wasn’t pan-fried. Instead it had been gently steamed to capture a delicacy that can often be seared out of it. Sitting upon what looked like a daunting pile of Cavolo Nero, once taken off it revealed that the nicely bitter greenery was just concealing some of the best crushed potato/mash I’ve had this year. Clams were cheerfully piled all around, each well cooked and with plenty of juice still lingering in the shells.

Gnocchi can too often be bad – gluey, tasteless and uninspiring. These were light and delicate and jet-black with squid ink. Around were dotted tiny florets of last of the season purple sprouting broccoli. These had been introduced to boiling water, but only briefly, so that they retained all their wonderful crunch, colour and flavour. Mixed in were clams, mussels, prawns and the lot was bound together by a swathe of green sauce which, is all over my notes so I can’t tell you what it was.

A dessert of Rum Baba was a deconstruction of the classic and made from a small brioche soaked in Cointreau and came with an orange mousse, a very decent semi fredo and a passion fruit sauce. Naughty but nice and just the thing to send you singing out into the dark, which we did. Two years on from the refurb and with a new look coming soon, Number Twelve is still number one in my book when it comes to quality and value and cooking that exceeds expectations.