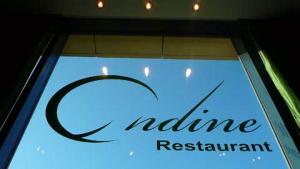 There is a breed of restaurant critics best-known for bloating their pages with musings on life, the universe and everything except the food. Whilst I understand the temptation to try to transcend the formula of writing three courses in three acts, noting celebrity diners and nodding at the décor, some chefs deserve a rest from the reviewer’s ego. ‘Ondine’ is a case in point. The offering at this glamorous seafood restaurant, housed in the curved corner of the Missoni building in Edinburgh’s old town, is easily strong enough to form the focus. In fact, if I were lazy, I could simply paste-in the menu, which does for fish what Rowley Leigh’s does for poultry and game, secure that you would read to the end, then dial reservations. But that alone would not convey my sheer enthusiasm for what is arguably Edinburgh’s opening of the year.

Representing the first stand-alone restaurant from Roy Brett, Scotland’s hotel chef of the year, massive care has gone into its construction. Moleskin lines the halls and private room, which has a porthole to the kitchen. Mosaics curl pillars beside the broad semi-circular bar. This is lit by cool LED lamps, meaning counter diners won’t spoil like dishes on a pass.

With grace and wit, a mural inspired by the ‘End of the Line’ documentary suggests a dystopian vision of a pillaged sea. From left to right, it opens cheerfully with scoffers cracking claws, but ends with sparse, murky shadows of fish floating around a wistful mermaid. This is the mythological Ondine, the beautiful nymph who sacrifices her immortality by falling in love with a human. Moved by a performance in Moscow, Brett’s best-friend suggested the restaurant took the ballet’s title, although only the reassurance of Sicilians convinced him. He said, ‘when I mentioned the idea whilst on holiday in Sicily, I received more kisses than ever before, which made-up my mind.’ The tableau also mirrors the influences on Brett’s life, including cooking contemporaries, Mark Hix and Rick Stein as well as Stein’s dog. It asks ‘but where’s Chalky’ of the Jack Russell, who died two years ago. 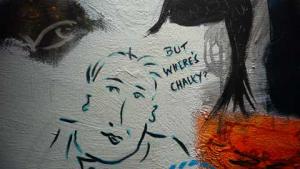 Fortunately a meal at Ondine need not be garnished with ecological guilt, this being Scotland’s first ‘Marine Stewardship Council’ (MSC) accredited restaurant. This means you are unlikely to find endangered species such as conger eel enriching dishes like noble fish soup – forcing Brett to work inventively.

Served by staff in ‘St. John’-style jackets, my friend and I began with gougères puffs and ‘Innis & Gunn’, a rich, but crisp, butterscotch-scented Edinburgh ale, leisurely matured in ex-Bourbon casks. Beloved by Brett, he plans to build a rack for regulars’ tankards. Acutely fresh Cumbrian rock oysters stirred the appetite and glossed over the memory of our long drive from London.

The initial scent of my fish soup cauldron stirred with reassuringly spicy rouillé and decorated with brittle Gruyére croutons came from its Julienne oranges, with a multi-layered, sea-scented, paprika-pepped finish. My friend’s terrine fused foie gras and grouse. It was pinkish, moist, with a sturdy whiff of game and a softly yielding texture.

Served in its bowl-like shell, fibrous crab minus dead men’s fingers, was bound with fresh mayonnaise, spun with diced chives, and offered with thin, crisped, walnut toast. Despite its generous scale, it was compelling enough to ensure we fingered the last fishy goodness free.

Showing an Italian influence, notably tender gnocchetti was laden with clams, bathed in buttery pesto, and, like the crab, sprinkled with dried garlic crumbs. A pannier of tall, blonde frites baked to crispness in dripping looked like matchsticks. Let’s call them ‘match-chips’… 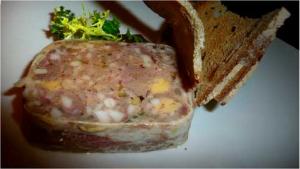 Finally, a glossy treacle tart which a national critic described as being as good as his mother’s was broad and shallow – easily the most fine-tuned, long-lived, seductive example to pass my lips.

With such a supreme offering from Scotland’s cool, deep waters, so often marred by bureaucratic controversy, but gently handled by one of its most respected chefs, Ondine dazzled – another star in this city’s increasingly exciting culinary firmament. Add to that Brett’s elegant mantra of ‘belief, trust and belonging’ (however you choose to interpret it), the enviable location of George IV bridge, and hopefully you have a strong enough recipe to distract otherwise meandering critics from writing about themselves in favour of Roy Brett’s food.Open lunch and dinner, Tuesday-Saturday and Sunday lunch, 12pm-4pm