You’re in Liverpool. There’s a restaurant in a tower. Do you go? Yeah, course you bloody go, it’s a fricking restaurant in a tower. Having said that, I’ve not done all the London ones, but I did do the Birmingham one, which unfortunately is a chain and wasn’t that great. That’s the thing, if you choose tower, you have to back it up with performance. Panoramic does.

It’s popular and I can understand whyÃ¢â‚¬Â¦you come across the odd Scouse diva that wants to be the next super food critic to give it a bit of a knock, claiming that it’s only popular because of the view, but in reality, the food is absolutely awesome, so is the view, so why would anybody knock it? Not sure why people do that, not sure I care.

Anyway, the first thing that will draw you in is the being on the 34th floor of a tower in Liverpool. The view is pretty cool. We managed to get in for early dinner around half five and watched the sun go down over the docks. Come on, that’s pretty cool. It aint Dubai, obviously, but hey, neither’s your house, know what I’m saying?

The thing that will make you go back is the food. No, I’m not being a goody two shoes, let’s think about it logically. If there was the most amazing place to sit, but while you sat you had to eat crap and lose money, you wouldn’t keep going back to sit there. But, if the food was great, heck yeah you’d go back.

Whoever wrote the menu is a legend. I love a really simple description. Rabbit & Black Pudding Ballantine. Potato Salad. Mustard Dressing. Awesome. I wouldn’t kick the ballantine out of bed, the potato salad was light and the mustard dressing didn’t call my mum a slag, so I liked it. Cracking dish, but if that doesn’t float your boat, the scallops are pretty cheeky. They’re served with butter-poached fennel and crispy chicken wings. Yeah, I know, scallops and chicken wings. Genius.

Beef fillet. Oxtail croquette. Salsify. Spinach. Beef Jelly. Yeah, you heard. What is it you want out of that? You want the beef to be really high quality, soft, pink, tender but with a bit of a bite. The croquette’s got to be interesting and different, but still be more meaty than potato. The salsify you’d have to look up in the dictionary. The spinach is there so you feel good about eating the dish, that’s your healthy get out of jail free card. And finally, the beef jelly, it’s just a bit of fun really and if it tastes good, great. Well, it’s all there and it even brought a little friend called Amazing Gravy.

I’ve been well looked after, the staff are top notch. They’re good with banter and I appreciate that. I feel pretty bad for putting off a Benihana chef the other night. I like a bit of banter and, whilst he did have banter, he also looked a bit unsure. He had that look of, marcus-might-be-a-twat, in his eye. Anyway, he dropped the salt and smashed a woman’s glass, but he’s a good guy. Nothing like that happened in Panoramic.

Dessert really wasn’t necessary, we’re stuffed and we told the guys this, which apparently is Scouse for’bring me a sample of every dessert’. I’m sorry, there is no way I was ready for that. I can hardly remember them all, but I do know they were all pretty lush. Their chocolate game is pretty strong, as is their cake. I remember liking all the cakes. You can have all of them too, there’s a Tasting Assiette option. Do it. 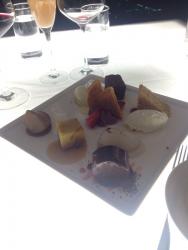 Novelty restaurant in the sky? No. Fine dining restaurant in a tower. Good people, great starters, menu’s written exactly how I like it, faultless main and so much dessert variety. It’s like queuing up at the Mr Whippy van and looking at the board. Still going to have a 99 with a flake though. Go for the view, stay for the food.

By Foodepedia16 May 2014Restaurant Reviews