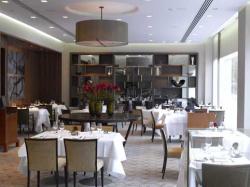 The prospect of dinner as a resident at a five star hotel restaurant is an occasion to anticipate. Unquestionably there is a danger of letting the plush surroundings cloud your judgement. However, if you are able to resist being influenced by the grandeur and keep your eye on the ball, then every so often you deduce that perhaps the hotel is not fully committed to fine dining.

The décor of Park Terrace is finished to an above average standard, though no more than a very trendy wine bar. Its crisp and clean feel with simple cream and brown colours is agreeable but doesn’t deliver the wow factor that you find yourself expecting. Not judging a book by its cover does not pertain here as there is a lack of character, soul, or identity for the restaurant.

The menu demands respect and boasts an assortment of well planned dishes, as well as an introduction and explanation of the sourcing of the ingredients. The wine menu reflects the impressive dinner menu, with some great selections from around the world. The pre-dinner cocktail deserves a mention as it was recommended, executed and delivered with an abundance of good taste.

I began with a gigantic crab ravioli. Served with a shellfish bisque that was rich and full of flavour, the starter was fantastic. The pasta was soft but not over cooked, and the crab filling was fresh and tasty. Minty B had the goat’s cheese, whilst Welshy G opted for Salmon. Neither failed to clear their plate, but on the other hand the starters didn’t spark any discussion.

The fruity Sauvignon Blanc, recommended by the house, was arguably more enjoyable than my favourite Sauvignon Blanc, which was also on the menu. Half way through my main of pork cutlet I uncovered the cunning plan of my two co-diners. Turns out they had planned to order different mains and swap half. The glass and a half of wonderful vino prior to finding out about the plan amplified my amusement.

Minty B had the grilled sirloin that was served perfectly pink and Welshy G chose the herb-crusted lamb, which was well presented. My initial amusement at the pact between my co-diners soon turned to envy, as I was left rather unmoved by the main course. Good ingredients, the broccoli in particular, but the portion size and flavour left a feeling of dissatisfaction.

Dessert arrived in the form of a raspberry flapjack, pear sorbet and soured raspberries. The sorbet had the right amount of sweetness to it and was arguably the most commendable element compared to the tame flapjack and standard raspberries.

Despite the repeated requests from my two stunning co-diners to share my room, I opted to stay in the hotel alone. Thanks to the very helpful and friendly staff at the front desk of the hotel I was given a very sizeable room. The en-suite was stunningly spacious, including a bath, shower and washbasin with plenty of little freebies on offer.

Furnish a room with a king-size bed and a decent quality plasma opposite and shamefully I’m satisfied instantly. However, throw in a few stairs leading up to a large desk with all the electrical connections to throw your own rave and a sofa that’s as soft as the pillows in the bed and I’m definitely impressed. I was able to sleep easily with the room in total darkness and silence.

Two minor little setbacks with the hotel, a small hole in the bottom of one of the sheets and the no show of the complimentary morning paper, but on the whole a good place to stay. Presumably the target market is for travelling business people, and if so the hotel and Park Terrace meet their demands. A good night’s sleep and somewhere to get a decent meal on site, the combination is a travelling businessman’s paradise.

By Foodepedia18 May 2010Restaurant Reviews