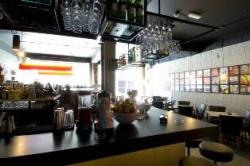 Bayley Street is a short street that connects Tottenham Court Road and Bedford Square, half way along it you will find Pinchito Tapas. As you walk into this tapas bar/restaurant you feel a good buzz about it, relaxed, yet vibrant. Dominated by a huge central bar there are booths to one side and rustic style tables throughout thie remainder of this bar/restaurant.

We took one of the booths, and as we sat were asked if we would like some of their own filtered water, bottled and if you want fizzy, carbonated by Pinchito Tapas; the water sells for £1 per bottle and is refillable free, profits from it go to Water Aid. The bar also does some interesting cocktails which are reasonably priced, so we had a Fino Sour, a dry sherry and lemon concoction and a Gin Txoice, made with kiwi fruit and would you believe, gin. Both were good and refreshing, and a nice way to kick off our evening.

To start we had a dish of padron peppers, which were middling sized green peppers that had been deep fried, a little crisp on the outside they had a sweetness to them that was balanced well by a slight sprinkling of salt. Our choices then began to arrive at regular intervals. The deep fried brie was little squares of brie that oozed as you cut into them and were sat on top of a tomato marmalade that had a lovely sweetness with the slightest acidic edge that complemented the brie parcels. Chorizo al fierno, one of the day’s specials, was a dish of meaty and spicy thin chorizo sausages, cut into bite sized chunks served in a spicy tomato sauce, which had a good depth of flavour and a touch of heat to it.

The dishes continued to arrive. Next was the garlic prawns, which delivered exactly what you might expect, the garlicky oil working well with these tender little crustaceans and of course we had to use some bread to mop up the oil that was left over after the prawns had mysteriously disappeared. The Hangar steak then arrived, otherwise known as onglet, the steak was served rare as over-cooking can make it tough, whist it had some chew to it the flavour was good and it worked well with the accompanying paprika alioli. The morcilla in bic, another special, was, in effect Spanish black pudding wrapped in filo pastry and deep fried, and it was great, the spiciness of the soft black pudding contrasting well with the crispy coating that had a slight saltiness to it. And finally, the patatas bravas, diced and deep fried potato, like little square chips, served with another good tomato sauce, was a great sharing dish to pick at.

We took a little break before deciding whether to have a dessert and if so what. In the end the Santiago cake won through, and it was an excellent choice as this dense almond sponge had a great almond flavour and we loved the texture in the mouth. We shared just the one.

We were unfamiliar with the wines so we were offered samples of four different whites, from which we chose a flint dry wine with some fruitiness to it. The Pinchito tapas list is not huge but most wines are sold by the glass and are reasonably priced. Service at the restaurant was very good, all the waiting staff worked well as a team. Pinchito tapas is a vibrant and fun place to go for a meal, the style of eating is informal so it works well for both lunch and dinner or for sharing a variety of nibbles with friends over a few drinks. We certainly enjoyed the experience.

Pinchito Tapas also has a sister bar/restaurant at Featherstone Street in EC1, close to Old Street station, which we understand has a very similar feel and set up.