Exeter Street in Covent Garden is perhaps not the most exciting street in London. On one side sits the blank wall of the Lyceum theatre, whilst on the other large vents cough out stale air to warm the thesps slipping into Jo Allen. Here also can be found Pip’s Dish where, if memory serves, a sandwich shop once used to forlornly wait for customers.

They’ve done a nice decoration job both inside and out at Pip’s Dish, I suppose you could call it Crouch End casual. It’s the sort of style liberal North Londoners have always favoured, ideas borrowed from that darling little place in the Dordogne where Tiggy’s father had a house. It’s a bit 1970s too, but not in a flared jeans and sexually predatory DJ way, more scrubbed wood and salvaged things. One suspects the hand of a schoolteacher mother of four with time on her hands and rather a lot of recipes for stews.

It’s casual dining which is good, many young people today have a horror of waiters, napkins, chewing and cutlery and so like to eat like Americans. Those of us a bit older also want to eat casual, but to eat food that hasn’t been cooked by a bearded kid with a second hand smoker and a Twitter account, both based in an ex-tyre fitters’ premises in Dalston. 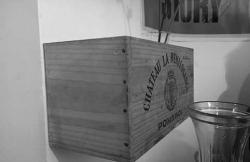 Anyway, Pip’s Dish has no permanent menu, just like the bistros d’antan. The blackboard on the wall says it all, so do have a look before you go in and sit yourself down because if you don’t like it you probably won’t get any other choice.

They cook here free-form using whatever is good from the day’s markets and that’s a very good way to cook, We saw pumpkin, braised fennel and crouton soup, followed by lamb burger with pea shoot and cucumber raita. Now I don’t eat burgers usually, so my heart sank a little but at least lamb is more interesting. There’s also a good chance it will come in an edible size, and not as some monstrosity that makes you dislocate your jaw in order to eat it.

The soup was rather under-seasoned we felt, our hands snaking out almost involuntarily to the pot of fleur du sel on the table, and I couldn’t pick up any aniseed notes from the fennel but there was some acidity to counter the pumpkin’s nutty sweetness. It was a seasonal soup that was reasonably on the ball and the semi-submerged croutons added some welcome twin textures.

What’s this? A burger not in a bun? Praise the Lord. I am sick of buns, especially brioche ones which some people think are suitable to carry minced meat. They’re not; they are far too sweet, unless you have the taste buds of a teenager. This naked lamb burger was cooked well, not perhaps as pink inside as I’d like, and well crusted too which is always a good thing. Potato slices on the side however were on the cold side and not cooked through, so the fresh mint leaves strewn over were funereal instead of celebratory. We ate them, but they should really have gone back.

We liked the pea shoot raita, exactly what you want to eat with lamb, and the cos lettuce was a pleasing addition. Not the biggest of platefuls, we ate it all up pretty quickly, but for the money fair enough.

An apple crumble was spot on, the topping crisp and the apple not over sweetened. It was also served at an edible temperature, too often crumble comes to table bubbling volcanically and spitting out lava in all directions.

A cheese board of very good cheeses from the UK was a reminder that the French don’t have it all their own way when it comes to fromage. The house red, not a bad drop of plonk for a fiver a glass, washed it all down.

Obviously with a menu that changes every day, you could eat a meal that’s better or worse when you go. Without a repeat visit I can only say that Pip’s Dish in general delivers a pleasing meal at a good price and in a style that is now pretty much unique in central London. It doesn’t have bare brick walls; it doesn’t have those ubiquitous filament lights.  And this close to the West End I doubt you’ll find better value.