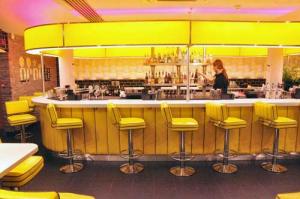 They’ve done a slick design job on Profile; busy bee yellow Naugahyde (I presume) leather yells out in contrast to the smart and shiny black tiled walls. You have to shade your eyes if you don’t want to be dazzled. Shuffling to our booth seats we clock all kinds of people having snacks at lunchtime; a couple with a pram, a gaggle of girls and then there’s us – two men.

Now you see such is my sheltered life I didn’t know about Profile’s status as an iconic Gay club/bar/diner. I just thought the waiters were a trifle camp, but that’s like noticing air stewards are a bit fey. Picking up on the ‘vibe’ we tried to look like two butch blokes confident in their sexuality who just happened to fancy a burger and had popped into the nearest place.

In fact at lunchtime Profile is simply a restaurant – the action doesn’t start until the evening – so no one need feel uncomfortable and the waiters are very nice and friendly, even if they clearly thought my companion could have done better in his choice of boyfriend.

The menu does the American Diner bit – meat loafs, hot dogs, salads, burgers, club sandwiches – you know the kind of thing. It could even legitimately be called a cuisine. Yank Food perhaps, although maybe that might be confusing in here. It’s food that should overflow the plate in its generous massiveness, more food in fact than a human being should ever eat at one sitting, the kind of food that gives Middle Americans arses so large they make bleeping noises when reversing.

First though some chicken wings. These are so singularly terrible it beggars belief. ‘Maybe they boiled them?’ suggests J as we look aghast at grey pieces of bird with no outward signs that they have even been cooked at all. Covering them with a kind of Asian ginger sauce does nothing to disguise their awfulness of texture and flavour. We neck down large gulps of our nicely frosty Starapronen to wash away the memory.

But surely the burger will be better? Yes it is. It has everything but the kitchen sink inside it; lettuce, tomato, onion, cheese, bacon and avocado. The last ingredient makes the burger slippery to get a grip on; too much pressure and the top goes one way, the bottom another and the filling onto my lap. But that’s burgers for you. The meat is properly medium rare as requested and overall it’s a rather good burger, juicy and tasty. The chips aren’t thoroughly cooked though and were probably out of a freezer.

Chicken Club is another big dish, only America could take the notion of a sandwich – light, delicate, refined – and supersize it. I remember the first Club Sandwich I ever had as a young teen visiting New Hampshire; I got the cocktail stick straight through my upper palate. I’ve been wary of the bloody things ever since. Unlike the starter this time round the chicken has clear griddle marks and consequently proper grill flavour and the toasted sour dough, whilst rapidly going as limp as Alan Carr’s handshake, actually tastes pretty good too. We share our enormous plates of food and then slump back satisfied.

‘Gotta have dessert fella,’ I drawl to J in an unconvincing American accent and go for Cookies with Cream Vanilla, Chocolate, Honeycomb, with white chocolate chip cookies, I could have tossed my cookies, they weren’t very exciting, but the ice cream was really rather good.

Profile is mostly all about the evenings; I hear the cocktails are well worth it and the atmosphere lively. The food is filling, unpretentious and does what it should do for the style of dining it is. Those terrible wings aside, hopefully just a one-off mistake, Profile is pretty okay providing something different in otherwise generally over priced Soho.