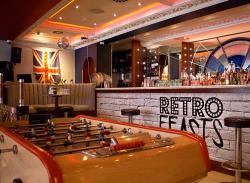 It’s a funny thing retro, depends on your age I suppose. For me anything that hints of the 1970s is retro and of necessity tongue in cheek. I have watch those 70s Top of the Pops episodes through my fingers and from behind the sofa, I had a tank top like that. And that hair. Oh God, what was I thinking?

For Luke Thomas, just 19, the 70s must be as relevant to him as the Wars of the Roses are to me – a time of horror that he managed to miss out on. Nonetheless, he’s got a bit of a fascination for the decade that fashion forgot and has a temporary restaurant, Retro Feasts, serving up some reinvented classics at the Embassy Club until January.

Luke is not actually cooking at Retro Feasts, from the look of his bio picture he is probably in bed by 9pm. No, I jest he’s actually running his main restaurant Luke’s Dining Room in Marlow or perhaps he’s at his other restaurant, Luke’s Broadway in the Cotswolds. I know, amazing isn’t it? When I was 19 I was struggling to roll halfway decent joints on the covers of my Yes albums, not run a small restaurant empire.

The last time I was in the Dining Room at the Embassy Club it was a rather traditional place with Joel Antunes at the helm doing fine French dining. It’s changed a bit since and while some of the chairs look familiar, someone has decorated the place in the style of Punk. The 70s were of course a divided decade; around 1976 those Yes albums were lobbed into a corner and I ventured out sans flares to sing the praises of DIY music and GBH rhythms.

My mother blithely carried on making prawn cocktails throughout the decade though, they were a guaranteed family pleaser; sometimes she experimented with the same prawn mix but in an avocado half! We marvelled at the bravery of it all.

Luke’s prawn cocktail looks good, the prawns piled into a glass on top of lettuce and diced avocado and with extra’pink sauce’ to the side. Unfortunately the retro thing has gone a bit too far with the choice of the prawns; they are just as small, tasteless and defrosted as my mother used to serve. This has also made the bottom of the glass waterlogged too. More pink sauce served actually on the prawns would have helped and where’s the brown bread and butter?

P has the sweetcorn and haddock chowder with dry cure bacon. This is not a retro British dish, so we have no memories to compare it to, she reckons it’s’okay’. It has rich tastes but the bacon is as leathery as Rod Stewart, it’s almost like Biltong. Perhaps it’s supposed to be? So starters not so good.

Much better were the mains. Chicken Kiev gets a bad rep; mechanically recovered meat shaped and coated in virulent yellow breadcrumbs with some watery muck inside. This was a real chicken breast, it had a bone at the end, was lightly coated in proper breadcrumbs and crisply fried and sat on top of green beans and a pillow of the most wonderfully creamy, flavoursome, mashed potato I’ve had in ages.

There could have been more garlic though; I suppose even when doing retro Luke’s cheffy instincts simply could not allow the full 70’s blast of vampire-scarer to go in. Apart from that it was a very good dish a poster boy for the retro concept and did I mention how very good the mash was?

The Fish Supper was unlike any sad fish supper I ever brought home from the chippy back in the day. The haddock was excellent, the batter crispy and just thick enough not to interfere with the fish’s flavour. Great peas, really great zingy tartare sauce and the chips were excellent too, singing of fresh oil at the right temperature. P wolfed hers down with many an appreciative noise while I distracted her attention and stole her chips.

Dessert of a Black Forest Pot was a Black Forest Gateau. In a pot, who would have guessed? It was exactly as I remember a BFG being but better. And richer. A bit too rich for me to be honest but I’ve never been much of a dessert person. P knocked back her cheesecake with marinated mandarin and pronounced it’very nice’.

Which is, I think, exactly what we always used to say back in the 70s as we pushed our plates away and went to turn on Nationwide for a look at Frank Bough’s latest jumper. The past is a different country, they eat things differently there, but Retro Feast has enough good stuff on its menu to make you want to take the trip.