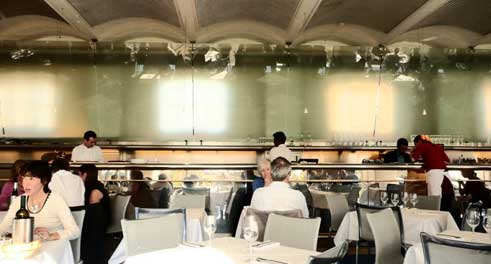 Glancing through the critiques it appears that the ‘River Café’ rose from last year’s blaze phoenix-like and with a new prefix – ‘Legendary’. Whilst proprietors Rose Gray and Ruth Rodgers have fostered one of Britain’s most influential talent schools within, emitting alumni Oliver Randall, and apparently ‘lucky to be fired’ Fearnley-Whittingstall, ‘legendary’ is an edgy tag. It implies indefatigability.

Recognised informally as an overspill to Auntie Beeb’s canteen, its supporters maintain that by sprucing the former Duckham’s ‘Wharf’ (warehouse at riverfront) into a centre of cucina rustica, Gray and Rodgers simultaneously overhauled Britain’s fawn taste buds. Such gastro-liberation is mooted as being on a scale as seismic as repositioning olive oil from a pharmacists earache cure to the lubrication of any cook worth their salt…

Being intrigued by legends, I ventured to darkest Hammersmith to see whether the Café’s refusal to compromise on ingredients (the Blair-sounding mantra being ‘sourcing, sourcing and sourcing’) could justify their legendary prices – forget concessions even in recession.

Initial signs made me apprehensive. With the charm of a Belsen bureaucrat, the teenage reservationist deposited us at a tight table obstructing a busy service runway. Spying a more spacious window seat, we negotiated a transfer. But with scrawled menus came unordered espressos that proved difficult to dispatch.

An unravelling wicker basket of apparently bought-in bread landed on the paper cloth. Such scanty wrapping rippled like an incontinent’s mattress protector. Although I am yet to find someone who rates the concept, the lack of side plates was another can’t be bothered detail. It resulted in a Big Bang of Felsina coated crumbs splaying the skimpy ‘Blue Peter’ blue carpet.

Staff were strangers to the iron and clad in their own clothes. Not only did this render them indistinguishable from customers in the colours of motley beach huts, it also led to slapdash fashion such as a waitresses’ three strap strong upper architecture.

Perhaps in honour of being packed-in like a tin of them, I started with a wood-baked sardine sandwich. Despite being priced as an airfare to Sardinia, the specimens were so bony that an arthritic anchovy would feel pity and the dish so stupidly conceived that the 4th Earl of Sandwich would snub membership. Rather than introducing a loaf to the fishes, each half of the trio of floppy, spitefully spiny baby pilchards clasped pine nuts, breadcrumbs and slimy chicory right up to the ‘hinge’ of what evoked a Venus fly trap. I did my best to fillet the chaos using clumsy Danish cutlery.

Lobsters flew by to be smacked in front of commissioning editors with all the grace one might expect from that other ‘River Café’ (or Caff), the greasy spoon at Putney Bridge. Except there they’re friendly and unfeasibly patient when fielding the deluge of misguided callers.

From a surprisingly sanely priced wine list, I took a big gulp of ‘little sweet one’ Dolcetto and hoped for edibility in the secondi.

My plump pigeon from Anjou was rudely stuffed with a thicket of thyme and aromatic marjoram – the herb of happiness. As with the sardines, it had been posted in the wood oven pill-box, just not for long. Only half was cooked, the other releasing a filmic spurt of blood segueing a dilute Amarone sauce with stewed cannelloni. Whilst the whole crouching creature looked arresting, it cost the same as an air rifle, which could provide a lifetime’s supply and hours of pleasure. As the saying goes, ‘give a man a fish and he eats for a day; buy him a rod and he feeds himself for life.’

Before a dense rhubarb panacotta, which looked and probably tasted like a breast implant, a waiter towed us to the new cheese room, or more accurately, cheese corridor. Fitted with humidity gauge and scattered with Parmesan, Pecorino and pert Taleggio, an established leak pooling the floor let the design down – ‘slack hammock” said my friend. As we weaved back via the open kitchen, the waiter gestured where a fire had nearly erupted that morning – the déjà vu starting point of a year ago.

Despite leaving a bottle and my briefcase, we returned to a turned table. Thank goodness, a glass of marzipan scented sweet Soave from flag-bearers ‘Pieropan’ went someway to salving our puzzlement at near eradication. But such haste soon became clear. Customers were abandoned as staff flocked like birds to a wire to redeem their lunch from the bar.

Meanwhile, a chill wind blew through single glazed glass. The River Café had delivered one of my sloppiest lunches. Was that a surprise? Its celebrity spawn advocates ‘intuitive’ cooking where quantities are felt rather than measured and plates are scattered rather than decorated. I don’t denigrate that approach when practised by a talent – comparable to artists like Giotto who could draw, freehand, a near perfect circle. However, to hijack an Elizabeth David quote, I felt that the laissez-faire food was symptomatic of a kitchen ‘throwing together a dish anyhow and hoping for the best’. And incidentally, it is the inspirational David rather than Rodgers and Gray, who surely should take credit for popularising country Italian in Britain.

One final thought: unless you are fond of mean estates, scrub and that joy beloved of planners, the stinking underpass, I wouldn’t recommend taking a post-dining passeggiata. It was distasteful enough to have been mugged at the table without tempting an encore on inner London streets…