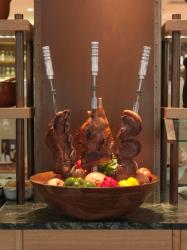 A few years ago I was en route to Aberystwyth with some American Football team-mates for the annual ‘Old Boys’ weekend. It’s a long drive to mid-Wales through the winding mountain roads and there’s only so much banter and 90s hip-hop that four grown men can handle before some storytelling takes place. ‘It was a clear black night, a clear white moon…”

No, no, I’m joking, Warren wasn’t really in the car, but the Solihull version Little T was in the passenger seat and told me of a country I had to visit, purely for the food, Kenya. Why Kenya? ‘You’d love it, Marcus. Basically, you get yourself some salad and potatoes, then they bring skewer after skewer to the table and carve meat on to your plate until you’re full”. Little T got it in one, I would love that kind of restaurant. I’m not sure I’d fly all the way to Kenya just for the experience, (although Ryanair does fly there, hmmm), but thanks to Rodizio Rico there’s no need.

Rodizio Rico is a Brazilian restaurant that adopts the very same process that Little T had described. Now I’m no newbie when it comes to eating challenges, the biggest and baddest of the challenge world have tried and failed to defeat Marcus The Buffet Slayer – Bodeans, TGIs, Harry Ramsden’s, Jimmy Spices – you name it and I’ve devoured it. I’m always keen not to just step up to the plate, but also lick the thing clean.

So this review is one of my favourites, an all you can eat meatfest. Picking a suitable accomplice was an easy task. This is a man task, no point wasting the experience with a female, I’ve not come all this way for someone to nibble a chicken wing and declare, ‘Oh I’m so full, I’m such a pig” Step aside ladies, this is a job for the G-Unit, Weeman 2.0, captain, coach, president and Mr Tarannau himself – GG.

We’re greeted by Paulo, the very helpful Portuguese manager, who knows his football, food and vino. His multitalentedness (not a real word, get over it) doesn’t end there, as during the meal he literally appears out of nowhere to the side of our table to explain what we’re eating. How long had he been there? No idea. But if there is ever a world cup of ‘What’s the time Mr Wolf?’ then Portugal are a safe bet.

A quick intro and we’re off to the salad bar with a mutual game plan of ‘let’s not fill up on the carbs”. Absolute no brainer in terms of strategy, though in reality the salads and starch looked far too appealing. We sat down with little mountains on the plates of couscous, banana fritters, potato salads and dumplings. A quick swig of a nice Portuguese red and we tuck into the side dishes whilst we await the first skewer.

The waiter arrives within a minute holding the first skewer, or what looks more like a sword. ‘Chicken Wings?” he asks. Or at least I think he is asking. It’s almost like he’s announcing that Lord and Lady Chicken Wings have arrived. Of course we take some. I go first and modestly use the little tongs provided to pinch one chicken wing. Then the waiter simply slides it from the bottom. Hey, not bad, I could get used to this.

I quickly clue the waiter in that there’s no need to announce what it is and ask whether we want any, we will be having some every single time he arrived. The skewers constantly arrive over the course of an hour, but instead of chicken wings we plough through lamb loin, lamb rib, pork ribs, chicken sausage, beef rib, beef loin and the tastiest of all, chicken hearts. Each is cooked just as it should be, the chicken is moist and tender throughout; the lamb is slightly pink and seasoned well; the beef is sealed with a mouth-watering outer layer; and the pork melts in the mouth.

It’s good to see GG and we manage to catch up really well in what seems like minutes, but turns out that we’d been stuffing ourselves for around two hours and got through a bottle of red. Then it hits. The stomach says no more. The meat sweats with their sweaty little laughs get ready to unleash their tsunami on the brow. We better stop, after all, we have dessert to attack.

GG and I are a little stunned at the sheer amount of food we’ve got through and we agree this is definitely the place to come with a sporting team. We’d bring our American Football team here, only problem is that this restaurant is in Fulham Broadway and they’re in Aberystwyth. Paulo offers dessert and we agree, only for Paulo to appear with a large tray with all sorts of made-in-house desserts that are available. GG has a chocolate mousse that he clearly enjoyed, whilst I polish off a pineapple and passion fruit mousse.

We’re done, absolutely chock-a-block, and I’ve already released the belt slightly. I can think of food no more, I’m longing for a deep sleep to see this off. It’s been a great time, the food I can’t fault at all as it’s simple, honest barbecue meat and nice salads. It’s like going to your mate’s for a barbecue on a much grander scale. Will I go back? Yes, of course, and I’ll be recommending it to any true meat eater.