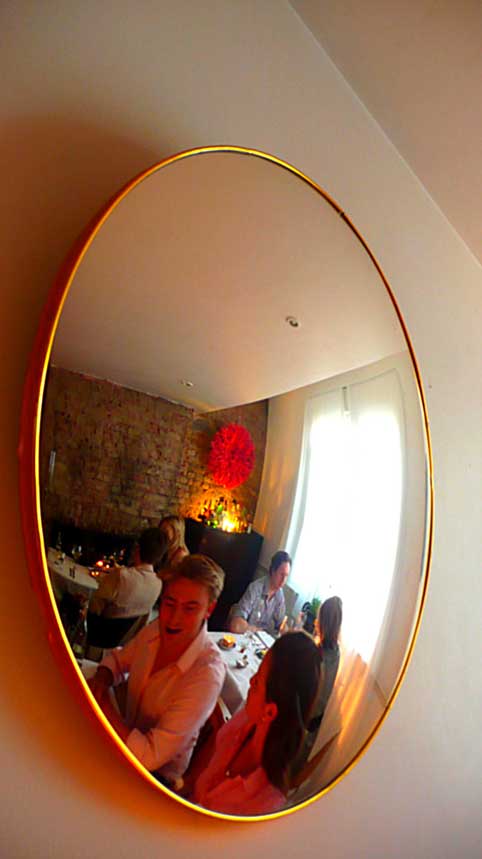 ‘The Saltoun Supper Club’ takes place each week at Arno’s home in Brixton, converted into a prop for pleasure dining. The décor bears testament to an artists eye – a nude of a tall, girlie figure by Tracey Emin clings, arms by sides, to the hall wall; on the stairs, a moneybox by Gilbert & George invites financial fuel with the words, ‘pay up and f*** off’.

From a small but tidy open plan kitchen, separated by a hedge of herbs, tables set for 15 were dressed with playful trinkets. Between a tangerine-coloured gnome candle, mint plant and paper fan, a little shrine to the (ecclesiastical) Madonna also served as a sea saltcellar. Nearby, a tin pail filled with ice was a thoughtful gesture for BYO diners.

During the pause between courses, Arno encouraged us to take a wander, which I had been itching to do from the first moment. In the eaves, his study was fascinating, brimming with a lifetime of books, a painting of on open envelope flooded by cascading tears and rippling with emotion, and a prostrate cowhide. Another room was so filled with artistic finds that one could barely enter it. In the immaculate loo, radio four spoke soothing bedtime stories via a retro looking radio.

A tenderly cooked fillet of well-seasoned sea bass, flesh still moist, curled a cool salad of new potatoes and uneven sized peas, fresh from their pods. To follow, a redux of Eton Mess: soppily ripe, silken mango, crusty, salted caramel and decadently gooey meringue. Rather lovely – the ideal dessert? But it was not yet the end. A still life of homemade petit fours including hand-pressed wafer leaves, strawberries dipped in white chocolate, and moist little brownies was dramatically displayed on a glossy, black square. Rousing coffee and just clipped, perky mint tea followed.

Our stash of wine by now evaporated, Arno generously opened a very respectable find of his own – an ’88 Château Pape Clement, worth about three places in the supper club (‘minimum donation’ is £25p.p.). With the words, ‘I’m sure it’s dead”, the couth, cigar, hymnbook and distantly blackcurrant scented Bordeaux turned out to be a vital delight. As did an impromptu cheeseboard.

In my limited experience, supper clubs – more popularly known as underground restaurants – are inevitably surprising. At Ms. Marmite Lover’s north London version (currently closed to give its owner a break) the surprise was the physically arresting spectacle of prolonged belly dancing by one of the guests. There were fewer shenanigans at The Saltoun because the food commanded all the attention. With a professional’s consideration, Arno and his couth assistant had cooked-up a supremely stylish carte. A very elegant evolution in a rather odd genre…

Reservations for September open at the end of July 2009