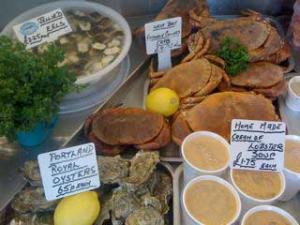 Chef Russell Brown is showing us a crippled lobster with one claw. Once a warlord, it now lives in an oxygenated tank in a fish processing plant. These mighty fallen are part of the Dorset fishing haul that makes up the Michelin-starred chef’s menu at his Dorchester restaurant, Sienna.

We’re at Samway’s fish factory where Brown sources his fish. We watch men in blue hairnets pack this morning’s catch into white polystyrene boxes, some for export, some for fancy restaurants. One of the workers has hooked his thumbs into the eye sockets of a cod to hold it up it in its full glory. ‘It’s easier to pick up the cod between the eyes because they’re so slimy,” he says before whisking us past crates of scallops, crabs, sea-bass, mackerel and plaice. In the summer, Brown was using cod and plaice weighing up to 1.5 kilos in the restaurant. Now the fisherman are landing more hake, turbot and brill from nearer the coast.

Back at Brown’s restaurant in the quaint town of Dorchester, diners can take their pick of menus starting at £23.50 for a two-course lunch or £26.50 for three courses – these are yokel prices. Sienna is a novelty – a tiny, front-room of a restaurant in, you’ve guessed it burnt brown and orange hues. Brown has run it with wife Eléna since they set it up in 2003.

We started with sautéed squid with slow-cooked chorizo and piquillo pepper veloute. The chorizo had been cooked sous vide – in a vacuum-sealed pouch – for twelve hours and it was distractingly silky, the softest chorizo I’ve ever had and very good, as was the squid.

My poached fillet of brill had come fresh from the local waters just the night before and was excellent with a nutty parsley root puree, parmesan croquettes and lemon butter sauce. This was a crossreference of flavours, each slapping up the quality of something else on the plate. It went well with our Santiago Ruiz, Rias Baixas, Spain 2009, a velvet wine.

For my own pudding, I ended with a dinky caramelised apple and cinnamon trifle whose cinnamon had transmuted into something quite fragrant. More fragrant than that poor lager lout lobster and possibly more of a winner.