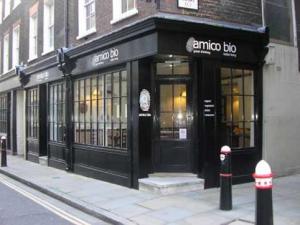 Despite having a name that sounds like a government department in a dystopian future whose remit is to create perfect members of society by altering the human genome, Amico Bio is in fact an organic vegetarian Italian restaurant near Smithfield. It’s family owned and run by Chef proprietor Pasquale Amico- who trained under Gualtiero Marchesi, Bruno Loubet and Giorgio Locatelli- and his cousin Enrico Amico who is also managing director of the organic family farm in Campania, which supplies much of the restaurant’s fruit and veg. How they get the food over from Italy on a regular basis, I didn’t ask.

Amico Bio is billed as “Charming, friendly, welcoming and meat-free- everything you wouldn’t expect of a City restaurant” and although the food was a mixed bag, it’s true to say that the restaurant does feel unique. With its village shop style windows it sits on a corner where Cloth Fair and a tiny old London alley intersect. The labyrinth of passageways that surround it are so small that Google maps can’t even be bothered to find out what they’re called.

Inside, Amico Bio reminded me of Mr Charrington’s second hand shop in 1984; The walls were lined with bookcases filled with Italian food tins and packets and faded books. Round tables were surrounded by wooden chairs with barley twist legs like the ones my Grandmother always had and there were fireplaces with brick mantelpieces displaying faded 1950’s family portraits. In the harsh lines and shiny glass and metal of the Barbican, it felt like a refuge from the corporate empire pushing down on the pavements outside.

Ensconced at our table in a cosy corner of the restaurant, a total of eight pieces of A4 paper arrived, four for each of us. One was the menu, one the red wine list, one the white and one the soft drinks menu. The food menu was pretty extensive with small plates, antipasti, risottos and pastas, none of which went over the £7.50 mark. Chef Amico is also a great advocate of tofu and seitan (mock duck) so there was a smattering of dishes featuring these.

To start we had fried Scamorza with Organic Tomatoes and Rice Croquettes filled with Mozzarella and Cabbage. The croquettes were dull but the Scamorza, an aged Italian smoked cheese, was astounding; it tasted almost like smoked bacon with a saltiness to match. Its texture was like halloumi that had fallen in love and softened somewhat as people do when they become besotted. It still had that slight teeth squeaking rubberiness of halloumi but in the centre it was gooey and runny like melted Camembert.

Said croquettes were bland; a rice filling dotted with mozzarella that tasted of nothing and shreds of plain boiled cabbage that were so over cooked they didn’t even add any colour to the dish. There was no salad, sauce or relish served alongside the croquettes and they felt a little like something you might make at home.

For my main I had Machheroni alla Sicilliana (giant macaroni pasta with a squash, sage and chilli sauce), whilst my guest had Battered Seitan with Cabbage. Again, one dish was divine the other barely recognisable as restaurant food.

The seitan seemed a bit of a cruel joke; I couldn’t understand why vegetarians or vegans would want to eat a meat substitute so plain, when they could have vegetables in a sumptuous sauce or a wholesome salad with a lively, zesty dressing. What flavour there was in the sietan was reminiscent of a herbal tea bag found at the back of a cupboard, which had lost all its aromatics and was left with just a musky, dusty suggestion of what it once was.

The pasta with its squash sauce was a genuine triumph of vegetarian cooking; the kind of dish that makes you forget there’s no meat in it. The squash had been slow roasted and then sautéed with chilli, sage and butter giving it a deep rich flavour with a sharp slightly spicy aftertaste. The sauce was loose and slid down the sides of the perfectly al dente giant macaroni that was similar in diameter to a cucumber. It was extremely filling and for £7.00, seemed like a real bargain.

For dessert my guest had Rum Baba and I went with a Ricotta, Chocolate and Candied Peel Cake. I expected a slightly heavy Christmas cake affair but what I got was a light, perfumed crumbly slice of sweet pie that was utter Mediterranean bakery heaven.

The Rum Baba, which of course I insisted I must try if I was to write about it, was equally successful in its own way; slices of fresh buttered brioche soaked but not drowned in rum, with rum sodden almost black cherries that retained their firmness but thankfully not their stones.

While some of the dishes were off the mark, the one’s that were good were very good. When they got it right the food at Amico Bio was inspiring, unusual and interesting, just steer clear of the seitan.