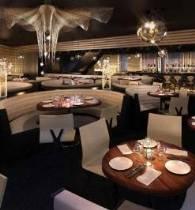 How do you like your steak? I don’t mean rare, medium or ruined, I mean what kind of ambience do you want?  The red brick university educated, job in the media, parents in the shires, style of Hawksmoor, or the school of hard knocks, what bloody parents, making a fortune at the bank, style of STK?

STK is certainly not going to delight fans of the former that’s for sure. It’s loud, it’s a bit brash, it says’shut your mouth and look at my Breitling’. Its location in the new ME by Melia Hotel at the Aldwych end of the Strand puts it just outside touristy Covent Garden but within reach of lawyers and City types from further east.

Perversely I like it almost as soon as we walk in. It’s not the kind of place the wife and I normally frequent, it’s black and cream and chrome and glossy and it’s all rather exciting and we feel that we’re in a different world, one where people don’t fret over gas bills or the cost of car repairs. The DJ, yes there is one, is playing 80s music and while punk was actually the soundtrack to our late teens, 80s music was the soundtrack to our early twenties, a time when we had our first jobs, every night was party night and nothing seemed impossible. Not even wearing white towelling socks.

So I’m in a good mood before I even get to the table. This is important because a meal is about more than the food anyway, unless you’re some kind of foodie sociopath. The right service, the right company and the right ambience can make up for a lot. Conversely even the best food can taste of ash if the other elements are missing.

So jigging gently in my chair to Michael Jackson, eyeing the nice people and enjoying the fact that the wife is clearly happy at being able to wear her smart clothes for once, and not to be surrounded by yelping 20 somethings, I’m ready for some steak.

STK, steak, it’s all in the name, STK is part of the ONE group all the way from New York, a lounge and a restaurant that is’female friendly’ (sic). The menu is all about what Americans like to eat, which can be something of an acquired taste centered as it generally is around the taste buds of people who measure a meal purely by the amount of meat in it. I mean have you seen Man v Food on the television? It’s not fiction you know, those terrible so called restaurants do actually exist.

Surprisingly refined scallops are available as starters, so the wife orders them. They are properly cooked, USA-large of course and really rather good with their curried cauliflower purÃƒÂ©e. My Prawn Rice Krispies are three well-grilled prawns on a bed of broken prawn crackers which burst into noisy life when the bisque is poured on. Excellent bisque, you could tell a lot of prawn shells had gone into its making and it had been carefully simmered and reduced to create powerful, deep flavour. The sweetness of the crackers balanced well and I was only sorry to have not spotted the chunk of lime on the side until I’d almost finished. It would have added an extra layer.

So what’s a New York Strip, I ask the waitress. She tells me it’s known as a Club Steak in her native Australia so I’m none the wiser. I’ll have one anyway as the only steak I think worth eating is onglet and that’s not on the menu. The wife being less of steak fascist has a straight up sirloin and both arrive after just the right amount of waiting. Mine I asked for medium rare as few chefs seem to know what’a point’ is, and it was a tad on the too rare side, although that’s preferable to over cooked.

What can you say about steak? The first bite is exactly the same as the last, which may be its attraction to some but not to me. Whatever, it was a good steak, well-flavoured and almost buttery soft. The wife liked hers too and we both liked the parmesan truffle fries which were chunky and fluffy. The’broccolini’ though were a bit dull being just broccoli and nothing more.

And so to pud, raspberry millefeuille was lost in translation as it was actually one feuille on top of raspberries, not even close to a thousand. Pretty to look at, light and fresh tasting it helped ease guilt over the steak consumption. I had salted caramel tart which was okay but the play of salt versus sweet was muted and too subtle, I mostly got caramel.

And I reckon I got STK too. It has a clear demographic target and I think it hits it bang on, delivering a meal experience that makes you want to taxi on afterwards to a posh club, throw some shapes and behave like a total banker. I don’t knock it, I liked it. Heck, I may even go back as the wife liked it a lot.’Female friendly?’ STK’s claim may not be entirely BS.