Romeo and Juliet, steak and chips, slippers and a glass of wine…like all the greatest pairings, nothing goes better than dinner and a show. That’s what Tom and Ed Martin of the ETM Group had in mind when they decided to make over the old Angel and Crown.

The Angel and Crown sits proudly on St Martin’s Lane in the bustling heart of London’s theatre district. Every so often hoards of people fill the streets only to dissipate into the winding lanes of Covent Garden or into the theatre where a night of entertainment awaits. 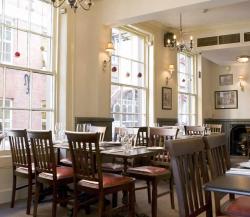 With award-winning venues including The Botanist, The Gun and The Cadogen Arms to their credit, The Angel and Crown is the latest notch in Tom and Ed’s belt. If you can squeeze your way through the throng over to the stairs in the corner, you’ll be whisked away to a quietly understated dining room. But it doesn’t feel as if you’ve left the fun downstairs, on the contrary, this dining room feels the place to be, a secret for those in the know.

As with the group’s sister pubs, the choices are distinctively seasonal and endearingly patriotic with classics like black pudding, rabbit, steak and kidney pudding and Stilton punctuating the menu. My dining partner, D chose snails, barley and bacon for starters. Served in a tiny cast iron frying pan it was like an al dente risotto. I had the half pint o’prawns with garlic mayo. An unimaginative choice I know, but I had my heart set on the Dorset brown crab, which they’d run out of. It threw me off, so I stuck with seafood. The prawns were nice, sweet and exactly as they should be.

For mains I ordered braised rabbit, grain mustard, bacon, peas and faggots. The meat was moist and the sauce was perfectly seasoned. Before I popped any of the dubiously titled ‘faggots’ into my gob I had to find out what they were. Rabbit bits, of course. I gave it a go but the aftertaste of liver got the better of me so I gave it to my more adventurous dining partner who enjoys that sort of thing. He ordered the grilled salmon, brown shrimp and dill butter sauce, which was apparently darn near perfect.

With mains falling between £11 and £16, the prices are very fair and the food is exceptional. Even though the serves are a tad on the small side, D argued that it is actually the ideal size for supper. And there are always sides. I ordered the creamed brussels sprouts with chestnuts. I should have ordered the hand-cut chips as well as it seems I fall into the gluttonous category D felt applied to those left slightly wanting after a meal.

And of course one must always leave room for pudding. Crème brulee, custard tart, toffee pudding and cobbler were on the menu. Again, my choice was thwarted when I was advised that the Angel Delight butterscotch Crème Brulee was out. I went for the special of the evening, a deep-dish lemon tart. D ordered sticky toffee pudding with vanilla ice cream and fudge sauce, which was lovely, and my lemon tart was exceptional. It was silky smooth and superbly tart.

From our window we watched the theatre crowds ebb and flow in the cold night. Warmed by the fire in the corner and a large glass of red wine, I almost forgot I was supposed to be taking mental notes. I was too busy having a nice time. That sums it up really, great food, great service, great location. Worth a look even if you’re not out for a show, but a excellent choice for pre or post show vittles.