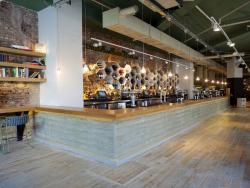 Folly; a costly and foolish undertaking. Not, perhaps, the best name for a new bar-slash-restaurant venue in the City. Ah but what’s this? Folly; a whimsical or extravagant structure built to serve as a conservation piece. Oh, okay, not such a bad name after all. But still, my first thought upon hearing the name of Drake and Morgan’s new venture was the former, not the latter. Perhaps it says something about me, but let’s not dwell on that.

The Folly is very much in the thick of things; a stone’s throw from Monument station, and the eponymous Monument, this is City Boy Central. But as we entered on what we thought would be a relatively quiet evening, there was a very mixed crowd, and quite a crowd it was. It’s just as well, because the Folly is enormous. A vast ground floor, with a mix of casual seating, tables set for eating, and communal benches leads down to a huge basement, slightly quieter, but still buzzy, and with an interesting mix of levels creating a slightly theatrical feel. The decor does err towards whimsy, with potted herbs on the tables, and old-fashioned plates on the wall. 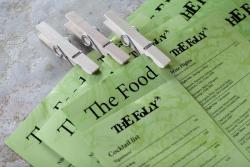 The menu is very much the same as at the Folly’s sister venues, with a good mix of sharing dishes, lighter bites, and full plates. It also struck us as being keenly priced, although there are luxury items which could whack the bill up. For starter, we nearly went for the charcuterie sharing platter – it would get our vote nine times out of ten, but we both felt like bucking our own trend. A wanted the Crispy squid, ginger, pink peppercorns & citrus mayo, and declared it very good. The squid was nicely cooked and quite delicately flavoured. I had the skillet of prawns with greens, chilli, garlic and lime with crusty bread, which were super. It was a lovely dish; the prawns were perfectly cooked, and the accompanying greens, bok choi had kept texture and flavour.

Onto mains; unusually, I fancied something fishy, and went for the fish and scampi. The nice people at the Folly have a playful approach; the fish and chips were cooked and served in a frying basket, which was a cute touch, but not the easiest vessel to eat from. The fish (varying daily, but I had coley, salmon and cod) were well-cooked and very tasty, while the accompanying chips and crushed peas were also good. A had the chicken breast, which had been stuffed with marscapone and wild mushroom and wrapped in crispy pancetta, served with herbed potatoes. It was another good dish; the chicken was moist and full of flavour, while the potatoes came in a mighty portion. A side of pepperleaf salad with lemon dressing was rather astringent, but refreshing.

The dessert menu at the Folly was relatively brief, but presented a number of appealing options. Luckily, the pain of having to pick just one was averted by the pudding shots; smaller portions of chocolate brownie, lemon peel crème brûlée and knickerbocker glory – it really was the only option, and turned out to be a good choice. The brûlée was nicely sharp, while the knickerbocker glory was suitably indulgent. The brownie had good rich flavour, but was a little over-cooked, we’d have preferred a gooey softness, but really, this was the only quibble of the evening

The Folly has a good choice of wines, split into drinking types, all available by the glass, and with quite a few coming in under £20. We had the South Africa Sauvignon Blanc, which was nicely fruity and crisp. Service throughout the evening was very good, with attentive waiting staff seemingly on the move the whole time.

So, foolish undertaking or conversation piece? I suppose that with any venture like this, time will tell, but judging by the atmosphere during our visit, the future looks promising for The Folly. We enjoyed our evening there, and will definitely be making a return trip before long.