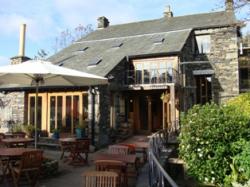 Ambleside is a particularly picturesque village on the northern tip of Lake Windermere and The Glass House occupies an idyllic setting on the road that leads into the centre of the village from Grasmere, adjacent to one of the area’s attractions, The Bridge House, a very cute, tiny, one up one down house built on a bridge across a small rivulet. The restaurant achieved some fame, or infamy, through its having been featured on the Ramsay’s Kitchen Nightmares programme some while back. Having stumbled across it and as it was so near to where we were staying, we felt compelled to give it a go. The restaurant is housed in a very attractive building and the seating is set out over several levels that zigzag upwards to the top floor. It has a clean bright style that is both comfortable and relaxed.

On to the purpose of our visit – our meal. For starters, the creamed smoked haddock, pea and leek tart was a tidy looking dish, the filling piled into its pre-cooked shell was quite tasty and well presented, although rather too liquid. The Cartmel valley smoked salmon with prawn and caper potato salad was again presented in an attractive way, the salmon was full flavoured and the salad dressing had a good flavour and consistency, but unfortunately the dish belied its description somewhat, the salad was mainly potato, with a scattering of capers and contained two or three prawns, that were almost certainly thawed from frozen for the purpose. It was rather disappointing.

For mains, the fillet steak with baked beef tomato stuffed with garlic mushrooms, fat chips and a red wine jus again looked good, and indeed the piece of meat was cooked perfectly, medium rare (as ordered) unfortunately it was let down by its accompaniments, the tomato was stuffed with quite big slices of field mushroom in a not very garlic flavoured sauce, which was too loose, and the chips, although looking great, stacked on top of each other tasted like they had been par boiled then fried in old oil. My dish, the Braised Hardwick lamb was substantial portion, very tender from its slow cooking, but there was way too little sauce with it, making the meat very difficult to eat unlubricated. This was served with a rather watery, grainy, carrot and swede puree (that should have been described as a rustic mash) and a good dauphinoise potato, which was a saving grace.

Desserts of two scoops of strawberry ice cream and one of sticky toffee ice cream, and the hot chocolate mousse with shortbread biscuits, which had a 15 minute wait time, were ordered. When they arrived, there were two scoops of vanilla and one of sticky toffee, in a ginger snap basket, both flavours of ice cream were good, as was the basket. The hot mousse had a good strong chocolate flavour and was very pleasant, but the biscuits, although light, crisp and good textured, had a strange taste. It took a few bites of the biscuits, and a perverseness on both our parts to work out what it was – onion and garlic! I imagine that they had either been handled by someone who had been working with those ingredients or left out in the kitchen near a pan where those two ingredients were cooking. We finished them both off in trying to detect what the flavour was, they were bizarre.

The Glass House had a good range of wines starting at around £15 a bottle with several served by the glass. Service was, on the whole pretty good, although they did mess up the ice cream order. Whilst we imagine that The Glass House is not quite the ‘nightmare’ that it was, it’s not all sweet dreams!