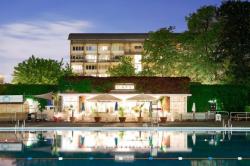 Looking around Brockwell Lido, sudden late evening sunshine floodlighting the 1930s buildings against the black clouds hurrying away to the east, I have a bit of a deja vu moment. I’m fairly certain that back in the early 1990s, while it was closed down, I attended illegal parties here, the empty pool used as a kind of dance floor with films and slides projected trippily against the pool walls. All very ecstatic, as I blearily recall.

Well twenty years on and just look at the place, it’s rather gorgeous. The building’s crisp lines have been perfectly restored and the enormous pool’s blue water takes the light and radiates it back into every corner.

The Lido Cafe is poolside with tables and chairs for alfresco dining, sadly unavailable this evening as those heavy rain storms keep passing back over. Inside is cosy and warm with well-spaced tables, tea lights and murmuring Brixtonians. Through the windows’ metal frames, thick with decades of institutional gloss paint, the last wetsuited swimmers can be seen leaving the pool, their conversation ricocheting off the walls before drifting away with them.

The seasonal menu is short and changes each month. Described as’modern English dishes with a European leaning’ there is in fact a strong Middle Eastern slant here with sumac, dukka and chermoula both on the page. There is of course a burger option on the menu, dry aged, rare breed beef etc. etc., but it seems a shame to eat a burger in a good restaurant, it’s rather like going to Rome and spending the entire week in your room watching TV. The sourdough bread comes with cold pressed rapeseed oil which is surprisingly an improvement on olive oil, especially when the oiled bread is dunked in the dukka. This addictive blend of dry roasted nuts, herbs and spices is a breakfast staple in the Middle East but it goes well with almost anything. We drink a decent Organic CÃƒÂ´tes Du RhÃƒÂ´ne, Domaine de la CharitÃƒÂ© 2010 served in a handy 500ml carafe. More restaurants should do this; 500ml is just about the right amount for two averagely alcoholic people and at £15 the right price too.

P has smoked char-grilled chorizo mounted on toast with piquillo pepper, rocket and aioli. The chorizo is rich and oily, slightly chewy but in a good way, and the aioli mild. The only slight negative is the toast, which is more of that sourdough bread, and is hard to cut through so the table, already rather rocky, does a fandango as P saws womanfully away. I have to steady the wine carafe against it taking a dive over the edge. I go for Pollack Scotch egg. The Scotch Egg Craze amongst the scenester foodies was thankfully a short lived one, even by normal standards for such things, so now it’s okay to see it on a menu. It’s a filling little number, the egg perfectly cooked for the vibrant yellow yolk to be just runny enough, and the fish around it moist. The exterior could have done with a bit more crisping perhaps, and salt is needed on the egg, but the roast garlic aioli is clearly homemade and the whole combo simple and effective. More garlic in the aioli though next time please and maybe some more capers too, their astringency is really needed against that rich egg.

Sitting by a pool makes me think of fish and there’s some on the menu, a fillet of silver mullet with English Nduja, wild garlic and potato hash with char grilled spring onions. Now I’ll eat just about anything char grilled, it must be a legacy of all those Boy Scout camp outs, so fish it is. They do a good job on the fish, its skin is crispy and the flesh tender. It’s served on top of the hash, which is good, but served a tad too quickly so that the fish juices haven’t had enough time to descend into the potatoes which aren’t quite crushed enough.  I could have done with a bit more nduja and it could have been a bit spicier, it was rather similar to the chorizo in taste and texture. These are minor quibbles as overall it was a very enjoyable dish that had the right tone of voice.

P went for a pan fried Gloucester Old Spot chop which was enormous. Fairly average tasting it got life from the sharp and sour sumac potatoes and a cider and grain mustard sauce. There was supposed to be preserved lemon in there too, but it wasn’t to be found. Again a bit more bravery in the spicing, i.e. another spoon full of sumac and it could have been even better. If you’re going to use those kinds of spices, you can’t be subtle, use a generous hand.

Dessert was drop dead gorgeous, cardamom and pistachio tart with orange sorbet. That cardamom uniqueness, it’s hard to tell where taste ends and aroma begins, gets me every time, and the pastry was absolutely perfect. P’s English rhubarb trifle went down a storm too.

The Lido also does breakfast and lunch and were it in Dalston would be rammed all day with DH Lawrence bearded lads and its cycle park would be full of ironic bikes. Luckily it’s in Brixton and in one of its more beautiful spots. The pool may not be a dance floor any more, but The Lido Cafe is a local place to gently rave about.

By Foodepedia31 May 2013Restaurant Reviews