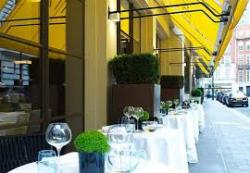 If you’re into getting your protein game on big style or you’re curious about my encounter with Mega Prawn, read on. If on the other hand you think a mixed grill is as evil as a wasp, it’s probably reasonable to assume that The May Fair Kitchen is not going to blow your mind the same way it did mine. The chips and salads are good though. Wasps are not.

Quince was here beforehand and it was crap. I don’t usually gripe about establishments but there really was nothing about Quince that I considered satisfactory. Ah, but Quince has gone now, yay, and in its place comes The May Fair Kitchen. A brand new brightly designed restaurant with beaming marigold yellow awnings flying the flag out the front. It feels better and fresher already.

You’re met by hostesses that, wait for it, are not actually dead behind the eyes. I know, mad aint it? Ours rocked her Bulgarian butt off. They lead you through to the chill cabinets where there’s a bigger meat selection than at a male nudist buffet. Gawp as much as you want, I did, but then I turned round and thenÃ¢â‚¬Â¦only then did I see him. Mega Prawn. He was one badass massive crustacean. The size of a Labrador. He could eat you. 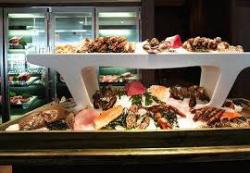 Mega Prawn was smirking at me from his icy bed, lying next to his non-identical identical twin prawn brother. The rest of the creatures on the ice display didn’t matter. The turbot, the scallops, the sole, not even the ray wing took my attention away from this fishy bastard. Everything was under control until my goofy Yankee Doodle accomplice lifted a lobster in the air, christened it Lucifer and asked to take him home. We’ll meet again Mega Prawn. I’m ordering you for starters. Ooh, and oysters too. Oh go on, scallops as well.

Mega Prawn met his mega death in the mega kitchen and arrived with his pal on a skewer, with fist-sized chunks of chorizo nestled under their bodies. He really did take some chomping. Gigantic. I mean seriously gigantic. Cut him into large mouthfuls and you’re still eating around 5-6 meatballs per prawn. I reckon the smaller the prawn the more flavour, but this definitely isn’t bland. Beside which, there’s a sizeable hock of chorizo to slice down before you even need to reach for the sauces.

Ah the sauces. We’ll come back to the sauces, but in the meantime, I struggled with this review. Put simply, what we ate was mixed grill on white plates. What I want to avoid is people dismissing The May Fair Kitchen as just a mixed grill place. There is a lot more flair, knowledge and craftsmanship on display here than some ordinary Harvester. Then, as much as I hate it, that goofy west coast idiot beside me came out with a perfect description, Ã¢â‚¬Å“The party’s in my mouth, not on my plateÃ¢â‚¬Â. I hate her now. 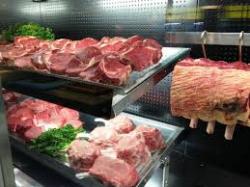 Now, the meat you’ll get is brilliant. Their supplier should be chuffed. Nothing was dry, everything had flavour. Their fish is also excellent and therefore mr fish supplier also deserves a pint. So you’re already getting an effectively pimped-up version of the mixed grill. Robust, thick sausages; delicately tender fillet steak with a herb crust; rich and crumbly black pudding; chunky pork chops with a crackly fat outer edge; pink succulent lamb chops; and whilst we’re at it we might as well chuck in a duck egg, beer-battered onion rings, some green zebra tomatoes and mushroom ketchup.

I’ve now decided to go back after writing that. I’ll fast a few days prior, then I’m in. Going back to the sauces, the one major obstacle to avoid when putting on the mixed grill showcase is the lack of sauces or moisture. Now here’s where we start to see the hidden talents of the restaurant because earlier on you’re hypnotized by the time you reach the table. There’s not even any need to look at the menu if you’ve already been to the cabinet and chill counter. Your mind is already made up. But you absolutely must look at the menu or risk losing out on the sides and sauces.

The May Fair Kitchen has ten sauces, three butters and sixteen sides. I like sauces so I like that. I also like when my mind ponders things like taste combinations and this part of the menu allows me to indulge that practice. Earlier it was meat, meat, meat, fish, fish, fishÃ¢â‚¬Â¦but now I’m intrigued to try the samphire and ginger as well as the lobster mash, tarragon and capers.

Incidentally, the oysters and scallops were also great starters. I forgot to mention those but when you’re mano-a-prawno with Mega Prawn, you just can’t take your eyes off him. The oysters are fresh and of course, big. Good ones too in my experience. The scallops are definitely worth a shout too, all lovely and velvety with a singed caramelisation. And if you’re a sauce person for fish then try the thai hot chilli to bring out some shellfish flavours.

Keep a thought open for the pig textures. I’m a real fan of pig cheeks and they’re in the mix. Twelve hours of braising then finished on the griddle. Knife not needed. A charred pork rib cutlet looks as though it ought to be dry, but it’s not. I even took some home. It was still moist. Then there’s some properly decent rare breed sausages, which really surprised me. I have this opinion that the more premium a sausage, the more it breaks apart and doesn’t deserve the name sausage. These guys are fantastic, as is the acorn fed Iberico ham.

Dessert trolleys probably shouldn’t be greeted with groans, but it’s a hard effort to pack all that away. We’ve shared a piece of cheesecake that comes served with coulis, not Kool Aid. Of course it’s good but at this point I’m beyond caring. You come to a restaurant and decide whether or not to come back. That decision’s made. Every part’s been a blast. Go if you like meat and fish, stay to defeat Mega Prawn.