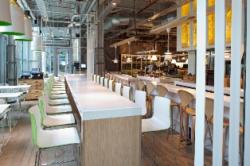 From its name, you’d think that the parlour was a cosy little restaurant tucked away in suburbia somewhere, but you couldn’t be further from the truth. The parlour is one of four new restaurants that are brought together in a new complex at Canada Square in Canary Wharf. It could best be described as a bar/restaurant, and has a stark, almost industrial feel about it, an eclectic mix of music is played over the sound system as the broad range of customers enjoy their drinks and meals. The kitchen is on full view to diners, giving a canteen like impression. We arrived there just before 7.00 on a Thursday evening and the place was buzzing, even the external enclosure where smokers can sit under large umbrellas with some external heating to stave off the elements.

We were seated and while we chose our meal each had a grape martini, one of the house cocktails, which was very palatable and slipped down very nicely. We also had some bread and olives, the selection of breads came with a roasted half garlic bulb ‘so that we could make our own garlic bread’ and some olive oil with balsamic vinegar, the dish of mixed olives had good flavour from their marinating. These two ‘nibbles’ were huge and alone would make a decent lunch for two people – we didn’t come near to finishing them. We moved on to starters and the crab and lobster risotto, one of the day’s specials was a meaty bowlful containing a generous amount of the crustaceans, the risotto was just al dente and a little ‘loose’ it was perfectly cooked and had great flavour. The skillet of prawns with chilli garlic and lime was also very tasty, the prawns, tail on, were well flavoured and the accompanying crusty bread was absolutely needed to mop up the residual oil and juices in the pan.

For mains the chicken breast stuffed with mascarpone and wild mushroom before being wrapped in pancetta was very tasty, the chicken was tender and juicy having been protected whilst being cooked by its pancetta wrap, which had a good crispiness to it, the filling added depth to the chicken, this was well supported by delicious herbed potatoes. The steak ‘n’ fries was another very good dish, the steak a sizable tender piece of rib eye, served medium rare as requested was tender, almost melting in the mouth. I asked for rosemary and rock salt potatoes rather than chips and they didn’t disappoint, a good handful of salad leaves finished the dish off well. We ordered some rack roasted root vegetables as a side, which were very good, but we really didn’t need them, each of our mains were pretty substantial.

After a suitable break we had a look at the dessert offerings, the home made chocolate brownie was a must, as was the knickerbocker glory. Both were quite adult desserts, the glory packed with red fruit chunks a few scoops of ice cream and cream, it was a bit indulgent but also refreshing, the brownie had was nicely chocolaty and supported well by the accompanying scoop of vanilla ice cream.

The Parlour has a good range of wines on offer, starting at just under £13 for the house wines, we chose a Chilean Cabernet Sauvignon, which was aptly in the ‘full flavoured, intense’ category smooth and velvety, it was well priced at £16.95. Service at The Parlour was excellent, despite being very busy the waiting staff were attentive and there when we needed them. The Parlour is a great venue, it is delivering really good quality food at very reasonable prices, it is excellent value for money – try it.