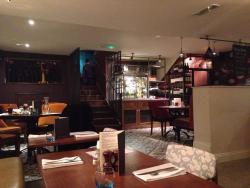 For many, a trip to the O2 is not just a special treat but an especially large pain in the posterior Ã¢â‚¬â€œ after all, the tube packs it in at midnight and boats are expensive and slow to get you back to base if you live slightly further afield than the Zone map.

If you’re making the trip from outside London for a gig or you fancy a stopover in one of London’s most lovely riverside postcodes, the newly renovated Pilot, a gastro pub with boutique mini B&B next door, just might save you the hassle of the late night tube crush.

Not much too look at from the outside, the pub (which is barely a 10 minute walk from North Greenwich station) and adjoining B&B look like a little like terraced houses with a boozer on the corner, which strangely is pretty much what it is.

Upstairs the pub is very busy for a Tuesday night, a good sign that the renovation has been met with open arms by locals who once knew it as an’old man’ pub. Downstairs is the new exte 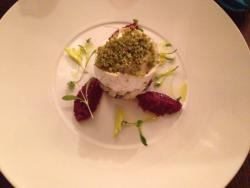 nsion, a nicely decorated neutral toned room with a duck theme. Everything from the duck egg blue to the cute duck patterned  chairs and pillows, plus the standard kooky wall enamels and playbills that are now so common, it is clear that The Pilot has obviously been doing its trendy-gastro-pub-decor homework.

The menu is a mix of classic crowd pleasing gastro pub-ery with a few more interesting dishes thrown in. There is a good amount of fish, game and meat on the menu and the prices are reasonable. An average main is around £11.00-13.00, with starters starting around £5.00.

So, down to dinner.

We found the Goat’s Cheese Waldorf salad to be a light and filling starter that whetted the appetite and didn’t overstay it’s welcome. Small but delicious, it was a nice introduction to the new Pilot menu…and was demolished accordingly. Also sampled was the nicely presented Venison Carpaccio which was served with a braised shoulder croquette; the croquette was a total scene stealer, and the 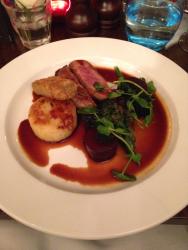 flavours were deep and strongly gamey.

Moving swiftly on to mains I chose to keep it country with Roast Barbary Duck Breast, confit leg, fondant potato, balsamic roasted beets and red wine jus. At £16.50 it was the second most expensive dish on the menu, but the portion was incredibly generous and the duck cooked perfectly soft and tender. There were probably a few too many mounds of roasted beets, but again the presentation was excellent and the dish dee-lish.

Holly, a fellow Foodepedia contributor, went for the Whole Baked Dorset Plaice, clams, samphire and cucumber & shellfish butter. Described by Holly as being some of the best Plaice she’d ever eaten, the dish looked as fresh and inviting as a dip in the ocean. When it arrived, the Plaice was piled high with samphire and clams Ã¢â‚¬â€œ sort of like when National Geographic shows you the inside of a shark’s stomach, though thankfully the former looked far more appetising than the latter!

Finishing up we were stuffed, but we still found stomach-space to pack away a crumble and a brownie. Holly chose the Bramley apple hazelnut and oat crumble, which was nice enough and I had the warm brownie. Both desserts were standard fare and enjoyable enough, though not a patch on the other dishes we’d tried. The warm brownie came with raspberry and white chocolate popcorn but sadly, as a person who can’t even enjoy salted the exciting flavour was rather lost on me.

All in the all, the renovation has turned what used to be a quiet old 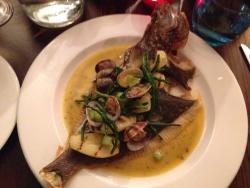 man pub (where the highlight was a fruit machine) in to a fully functioning  bed/breakfast boutique gastro pub where the main feature is the menu. If you’re in the area for a trip to the O2 or a local or even just looking to go somewhere new, you couldn’t do much better than The Pilot for a pitt-stop or two.