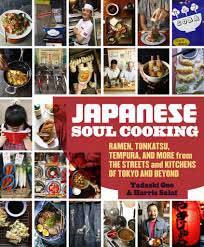 The writing style really sets my teeth on edge. Everything is’awesome’, drinks are’brewskies’,’stuff’ is’cool’. It’s like being stuck in a lift with a Red Bull-addled teenage skateboarder, all you want to do is get away before your brain slides out of your ears.

Which is a shame as the book is otherwise really excellent, almost rad. The knowledge is vast and the recipes very very tempting.

Well no. We in the West have already discovered ramen and tonkatsu, the Japanese comfort food that fuels boozy nights out and aids recovery the next morning. Tempura too is available from places that are far from glitzy but which deliver value and flavour.

But have you tried okonomiyaki? Have you even tried saying it? This pancake style dish evolved from being just filled with cabbage to a dish that has a myriad of toppings and on the Western side of Japan it appears in all kinds of forms, the long flat top griddles used to cook it being a feature of restaurants in Osaka and Hiroshima. In the latter the okonomiyaki feature cabbage, yakisoba noodles, Japanese Worcester sauce and pork belly to delicious effect.

Udon noodles are not that hard to find in the UK, thick and chewy as white worms they’re said to be hundreds of years old. In history that is, no need to check the sell-by date. They’re slurped up in train stations and other places people need a fast food fix.

In the city of Tamakatsu’udon taxis’ even ferry udon fanatics from place to place, the noodles kneaded by chefs stamping the dough with stockinged feet. Cooked with tofu, shaved beef, pork eggs and mushrooms, chicken and just about everything, and famously with a curry sauce, they can even be served cold with fresh tomatoes.

Great photography, clear precise instructions and with a useful ingredients glossary, this is a cookbook that’s going to leap to the front of your collection and you won’t get bored for months maybe not ever. Okay some of the ingredients may not be in your local Waitrose, but hey dude that’s what the internet’s for, yeh? Awesome.