The coldest day of the year thus far, and we’ve battled a blizzard and the treacherous frozen pavements around Kings Cross to 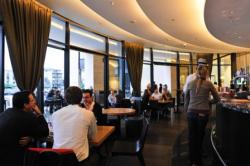 arrive at tonight’s destination, The Rotunda. Emerging into the lively and brightly lit atrium, we made our way to the entrance, picking our way through a busy bar filled with theatre-goers and Guardian staffers.

The brutality of the weather meant the waiting staff had an unexpected job – helping a cyclist who had taken a tumble into the adjacent frozen canal after losing control of his Brompton on the icy footpath. Luckily, the only thing the treacherous landscape provided us with was views of snow-covered narrow boats.

Also from the starter menu, a devilled and diminutive Irish fry-up featuring crubeens (pigs trotters), suet-baked kidney, white pudding and chestnut mushrooms, whimsically topped with a fried quail’s egg. The’devilled’ element came in the form of a jus offering a faint echo of HP sauce, fitting for this cheeky homage.

Staying with the’Irish’ theme, we tried the hare and oyster steamed pudding. Now, I find suet puds can often be too lumpy and heavy. To my delight, not so on this occasion, the pastry light and proportional to the rich filling. A strong anchovy flavour overwhelmed the delicacy of the hay-baked lamb neck, redeemed by watercress puree and a side of roasted squash.

All of The Rotunda‘s grass-fed lamb and beef comes from their own farm in Northumberland, sent down to London and stored in the restaurant’s own hanging room for a minimum of 28 days. In a timely example of supply line efficiency, it’s butchered, prepared, and cooked on-site. Staff are well-briefed, and will even show you the hanging room if you’re not squeamish.

A big bowl of champ was champion. I hadn’t had this dish for a long time and this was a rough-and-ready, spot-on rendition. My companion felt similarly about the obligatory beef dripping triple-cooked chips, polishing off the lot. We managed afters, though, in the form of rosehip soup and vanilla ice cream and a buttermilk pudding with spiced quince and pear.

That was it, or so we thought. Then a gooey baked Winslade cheese was brought to our table with toasted walnut and raisin bread. The unsolicited treat slipped down nicely with what was left of our bottle of Gigondas, making our polar expedition well worth venturing out for. We waddled back out in the snow, perhaps a little more ‘rotunda’ than when we walked in.