When is a pop-up not a pop-up? When it’s a squatter, open for half the week all year round. This is the premise upon which The Seagrass trades and for fledging restaurateurs launching in a double-dip recession, it’s a canny concept indeed.

Located halfway down Chapel Market The Seagrass lodges Thursday to Saturday nights at Manzes, one of the last remaining pie and mash shops from the turn of the 20th century. It’s a charming room with original tiled walls, pendant glass lights and ample seating in the form of narrow, rickety wooden pews. 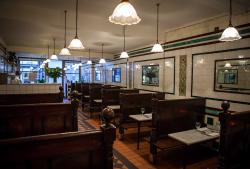 While they may look the part, these seats were originally designed as a temporary perch for lunchtime pie-lovers, not as a receptacle for reclining restaurant goers and by the end of our first course my buns were sore. By the end of the meal I was in abject agony and could not wait to get out. But maybe that’s the general idea for a place that only offers one meal deal – three courses for £30 – and has a BYO policy? If they can’t screw you for extras and a hefty wine mark-up, what benefit is there in having customers littering up the place?

The argument with the furniture aside, the ambience is relaxed, the soundtrack jolly and the waiters chummy, taken to bobbing down on their haunches for a face-to-face exchange if you have a question worthy of more than a ‘yes’ or ‘no’ answer. When we asked Marco for some water he replied, ‘I’ve only got tap, is that OK?” How refreshing.

The brevity of the menu is parlayed by the fact that I could have happily ordered everything on it. The Seagrass USP is seafood and game for the simple reason one of the three partners runs The Wild Game Company and another specialises in cooking fish. With established core suppliers and a daily market for anything else you might need on the curbside, this is less fusion fad, more intelligent innovation.

A complimentary serve of mini lobster fishcakes (a tad spud-heavy) was followed by our first course choice of Highlandpigeon breast and West Coast mussels with chorizo, shallots and chilli. The bird was pink in the middle but slightly curled on top and didn’t make a natural bedfellow for the accompanying ratatouille, which somewhat took over with its citric kick. The mussels were OK, on the small side and crammed into a finger bowl sized dish, but with no evident zip from either the spiced sausage or broth.

Half a Scottish lobster came next, doused in a thermidor sauce the likes of which I’ve not tasted before. A cream sauce flavoured with tarragon and chunks of mushroom. On the side, a mountain of red cabbage and celeriac slaw – again, none of them natural partners for what can so effortlessly be the star of the show and frankly rather weird.

Thankfully chef’s interpretation of the haunch of venison with a redcurrant jus was more classically inspired, although I side with the esteemed restaurant critic (ahem) Michael Winner in his dismay for anything served on a bed of wilted spinach. Kale or spring greens would have been better and tastier. To quote another Winner-ism, our two side orders of triple-cooked chips were ‘historic’.

When it came to dessert you had to hope everyone in the room liked rhubarb or cheese for that’s all there was. The warm fruit compote was wonderfully spiced, sprinkled with a hazelnut crumb and a dollop of crème fraiche. Small but beautiful. My man seemed delighted with his cheeseboard but in my opinion it could have come from Sainsbury’s round the corner, featuring as it did the ubiquitous Colton Bassett Stilton, smoked Applewood cheddar and an under-ripe Somerset Brie. A shame as with all their market friends you’d expect it to be ten times more exciting.

Overall, while my bum would beg to differ, we had a nice night but the lasting memory is that of the evocative Manzes pie shop interior, rather than the food by Seagrass, which is probably not the result the squatters want to hear.

By Foodepedia15 May 2012Restaurant Reviews