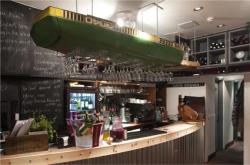 If you only read restaurant reviews on blogs you might think restaurants (good ones that is) didn’t exist west of Regent Street. The blog world has ignored the Pet Shop Boys’ advice and determinedly gone east, although if all the people that claim to live in Hoxton actually did live in Hoxton, the place would have to be the size of Moscow.

The Shed in Notting Hill might not appeal to your average Nouveau East Ender – many of the men eating here are wearing sunglasses on top of their heads, while the girls have the Tiggerish happiness of people not worried about paying the rent on their local flat  – mainly because Daddy does that for them.

There’s a sense too that, when not on the ski slopes, weekends in the country figure strongly on the clientele’s agenda, not least because the decor of the Shed has a rustic vibe delivered in tractor loads, and in fact there’s a tractor bonnet hanging over the bar.

This is quite understandable as the brothers behind the Shed, Richard, Oliver and Gregory Gladwin, grew up at Nutbourne Vineyards near Pulborough in West Sussex and have mud flowing through their veins. It’s a design look that could infuriate some people I suppose but which I find rather soothing. The Shed also lives up to its name by giving the vague impression that it might fall down any second, a state of affairs all good sheds tend to have in common.

With spring light warmly treacling in at the windows the Shed has flung open its end doors to a small terrace, so allowing us smokers to stay in touch with tables made from reclaimed wood and, frankly my dear, old scrap. The waitresses are sunny, the menu is a list of what I like to eat and lunch looks a good bet.

It’s like being at Petersham Nurseries in the good old Skye Gyngell days when, looking like a disconsolate horse, she could often be seen peering out of the kitchen hatch. It’s’small plates’ here, but before you throw up your hands at this fashion faux pas remember how much you like tapas and the pleasure of not being stuck with three courses. Brother Oliver is the chef here and his CV shows Oxo Tower and Launceston Place, as well as at River Cottage HQ where Hugh F-W, the West Country version of Jamie, reigns supreme. So that’s okay, then.

The plates average around £8 each, and two per person are recommended but we hummed and hahed because I wanted to try them all. First out of the kitchen came Beef and Red Wine sausage with Shed mustard, a simple dish that relied solely on the quality of the sausage and the mustard to make it work, which it did. The sausage was juicy and with a crisp, snappy skin, while the mustard was a sweet grain type and much better than the Moutarde De Meaux it was based on. 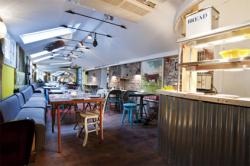 A hake, chorizo white beans and wild garlic dish, was straight outta Spain. The grizzled, piquant and slightly chewy chorizo was a perfect foil to the firm hake, while creamy white beans, teetering on the edge of falling apart were laced with lovely spiky shreds of fresh chilli. It was a plate of pure honest gustatory pleasure and I wished I’d ordered two as I fought my wingman’s fork off. This sharing plate idea is okay as long as one of you is less keen on a dish than the other, if not things can get ugly.

We didn’t fight over confit chicken, lemon, soy onions and cauliflower couscous because neither of us liked it all that much. It was fine as far as it went and the balances were well judged, but chicken just doesn’t confit as well as duck, the meat is too tender to begin with and it emerges out the far side with less character than a Liberal MP.

Ah but sweetbreads make me smile, I never remember which part of the lamb they’re cut from, all I know is that I love them. Here they came with a pan-induced golden tan, a luxurious silky texture and with the offaly good flavour that’s reminiscent of bacon. Also reminiscent of bacon was the bacon that came with them, proper bacon that the Shed sources itself from the home farm. Sweetbreads soak up surrounding influences like first year students, so on  a bed of luminous, bitter, kale, the British answer to cavolo nero, and some Jerusalem artichoke it was a real pleasure to eat these. The casual, relaxed presentation belying the lively talent of its creation.

A Magnum Vienneta Parfait for dessert was a rather rich slice of pudding perfection; not too heavy but a belt loosener without the guilt trip.

With cooking that has the flavours, charm and simplicity of a Brawn or a Terroir, and a style that makes you smile despite yourself, The Shed has plenty to recommend it to locals. Even scenesters should find it’s well worth pedaling the single geared bike over to Notting Hill for.