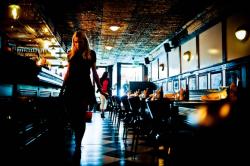 Soho Diner is the sister restaurant to the Electric Diner in Notting Hill and the second collaboration between the Soho House group and Chicago-based restaurateur Brendon Sodikoff. The Soho branch is located on Old Compton Street next to CafÃƒÂ© Boheme and carries a very similar aesthetic to its west London sibling: a kind of ‘distressed diner chic’ with a big bar, booths, low tables and dim lighting.

The menu is also very similar, offering American diner staples Ã¢â‚¬â€œ burgers, chicken wings, and shakes Ã¢â‚¬â€œ from morning ’til night. Although its opening was rather overshadowed by the fanfare surrounding the arrival of Shake Shack and Five Guys, Soho Diner is a more than worthy addition to London’s burger landscape.

Let’s start with their burger. In an unspoken twist borrowed from Sodikoff’s Chicago restaurant Au Cheval, a single burger arrives as a double and a double as a triple, which was fine by me but could conceivably be off-putting to others. Our single (double) arrived with half an avocado and a slab of bacon thicker than a pound coin, and ticked all the boxes in terms of flavour and consistency. A main of mac & cheese Ã¢â‚¬â€œ made with five different cheeses, no less Ã¢â‚¬â€œ was also excellent as were starters of honey friend chicken, and shrimp cocktail.The menu is hardly original but what Soho Diner does, it does very well indeed.

What is more unusual, however, is a drinks menu that offers cocktails on tap Ã¢â‚¬â€œ pre-mixed barrels of favourites such as mojito and negroni that are poured in an instant and cost only £6. While they tasted fine you could certainly tell they weren’t freshly made, but at £6 you’d be within your rights to care not a jot.

A dessert of a giant banana split defeated us but still provided enough of a nostalgia trip to end things on a sweet note regardless. Soho Diner may not be somewhere you need to seek out immediately but for reasonably priced American diner food in central London, you’d be hard pressed to find better.