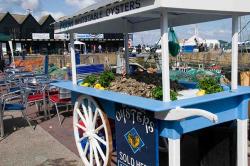 The town of Whitstable, on the North Kent coast, has been synonymous with oysters for hundreds of years (Probably longer in fact; two thousand-year-old oyster shells excavated in modern Rome have been traced back to this traditional seaside town) and the modern festival reflects a tradition that dates from Norman times.

A taste of Kent and the rest of the world, including Whitstable’s most famous shellfish in the best of settings. Music on the Harbour Stage from the Shanty Singers, Big Orange Head and Spy Plane and the inimitable Trouser Trumpets

The traditional Landing of the Oysters followed by the Town Parade, this year themed around Ã¢â‚¬Å“Fishing in the Deep Blue SeaÃ¢â‚¬Â featuring Whitstable schoolchildren, the town Giant and guest and music from Samba Pelo Mar along with the new Native Oysters Marching Band .

·    Sea Sunday Service, 9.30-11am, Sun 28th July, St. Alphege to Whitstable Harbour: a gentle start to the day with this traditional community service and parade

·    Oyster Challenge, 3-5pm, Sun 28th July, Whitstable Harbour: eat six oysters and down half a pint in the fastest time; only for the brave

·    Images from the Shell Advertising Art Collection, all week, Whitstable Museum & Gallery: the artists of the 1920s in Shell’s famous campaigns

Rail: Whitstable is easily accessible by rail with regular trains from London Victoria (1hr 30mins) and from Thanet.  There are daily promotions on South Eastern Railways so please check the website for more information: www.southeasternrailway.co.uk.

Whitstable railway station is a short ten-minute walk from the town centre.

Bus: Whitstable has a regular bus service to and from Canterbury and Herne Bay.