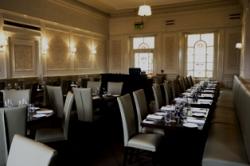 Following our visit to The Warrington, to sample their bar food, back in December, we decided to go along to eat in the main restaurant of this characterful west London pub, which is part of Gordon Ramsay’s empire. The restaurant is situated on the upper floor of the building so on arrival you enter this lovely old bar area. We were early for our booking, so decided to stop for a drink before climbing the impressive sweeping staircase to the restaurant. The restaurant is in stark contrast to the features of the bar area below, which we love, it has a cool elegance beautifully decorated with stylish furnishings, it’s almost like you are in a different building, it is a remarkably relaxed and quiet place to sit and enjoy a meal, you really wouldn’t think you were above a bar full of people.

We were seated, and had another glass of wine each while we chose our meal; you have to, don’t you? The menu offered some very interesting dishes to choose from. Having chosen, we waited a short while before these delightful little coffee cups arrived, an amuse-bouche of pea veloute with truffle foam, which was lovely. Our waiter had strongly recommended the seared Scottish scallops, which we were equally drawn to with two other dishes, so we shared one as a sort of pre starter, it arrived and on each dish a beautifully seared scallop sat on a bed of creamed cauliflower, topped off with a quails egg and encircled by a truffle and Madeira sauce, they were quite simply divine. On to our individual starters, the twice baked Dorset crab soufflé was light, tangy from the stilton cheese in the mixture, but with the crab flavour coming through, it was remarkably good. The caramelised beetroot tart was lovely, its earthy sweetness was great, the medallion of soft goats cheese, that had been seared, paired perfectly with it (as did the plum jam on the side) an excellent combination.

For our mains, the fillet of highland venison was served on an elliptical plate, three sizeable slices sitting cut side up, showing the medium rare venison, its bed of mushroom and chestnut and lovely thin pastry case. A slice of poached pear was sat atop each tranche as were slivers of parsnip crisps, the dish was handsomely brought together by a lovely spiced berry and balsamic sauce. The combination of flavours and the texture of the meat were amazing. The aged Casterbridge beef fillet, again cooked medium rare, had great flavour and was beautifully tender, served with a ‘cake’ of very tasty, boldly flavoured oxtail and a bone marrow croquette; these were great flavour combinations that worked remarkably well together and were well supported by some buttered turnip. With our mains our waiter suggested we have broccoli with hollandaise sauce and a portion of egg, bacon and sundried tomato macaroni cheese, we agreed, the slightly acidic sauce on the just al dente broccoli set it off well and the macaroni cheese: well, each of us could have just eaten a bowlful of it on its own, it was lovely.

The dessert menu was presented to us and though we were each sated, once again, for you dear reader, we went the extra mile. Despite being called to by each offering on the menu we eventually chose the honey, whiskey and Drambuie brûlée which was a sinfully adult dish, and the trio of English puddings, which comprised of a lovely light orange marmalade sponge, a tangy lemon flavoured bread and butter pudding and an apple crumble, which had nicely sharp apple balanced by a rich crumble mix – they were all excellent

The service at The Warrington was second to none. Somehow their front of house staff knew where they should be and exactly when they should be there. The wine list has a good range by the glass and house wines at a little over £14 per bottle. We had a very nice Rioja, which was round and smooth and stroked your tongue as you drank it. Dinner, or lunch at the Warrington, is a great treat for yourself and well worth doing. It has a competitively priced a la carte menu as well as a fixed price menu that currently offers two courses for £18 and three for £22, this is subject to certain time restrictions, but there is a good range of choices for each course. The Warrington really is a place that should be on your ‘to visit’ list.