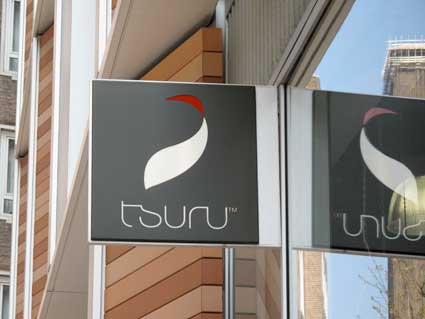 Lunch options are thin on the ground around our office. Yes there’s ‘that’ sandwich shop where everything is cold and wet and tastes the same whichever branch you go to, or there are local sandwich shops where they charge a fortune for something nasty encased in cheap white, or mock brown bread, and slathered inside with catering margarine. It fills a hole but really all it should be is landfill.

So wandering further afield with the spring sunshine spurring our lazy legs on, we got to Tate Modern and were surrounded by hordes of kids with enormous rucksacks. (Why do they carry these? Are they full of bricks to help toughen them up like marathon runners?) Here we came across Tsuru, a clean bright place with tables outside and inside a kitchen turning out bento boxes, sushi, salads and even Katsu curries all at reasonable prices. Blackboards and signs scream sustainability telling you that the yellow fin tuna is line caught and that the salmon is fresh from the Shetland Isles. Chicken is free range and the packaging is as biodegradable as can be.

There are tables inside but at lunch you’d be lucky to get one, the main thrust at this time is takeaway but as we arrived early a table was free. California rolls, make and hosomaki were pretty good and the wasabi, although the harsh version, wasn’t too powerful. The avocado was a tad under ripe in the California roll but it tasted fine doing its traditional job of being an oily substitute for tuna. California rolls are essentially inside out makis and we tried one dusted with wasabi flavoured flying fish roe, which had fire and a pleasant ‘pop’ as the tiny eggs burst in the mouth.

The crowds getting takeaways was now growing fast and the salads were outselling the hot dishes as people realised just what an unusually warm lunchtime it was. Even so, we had to try the Katsu curry, a strange beast that came about when the English brought their version of curry to Japan. Tsuru use sixteen ingredients and an eight-hour cooking process to make their sauce, which, unsurprisingly given its provenance, is rather similar to curries in England back in the 70’s. Far superior in taste and texture, it is still very different to modern curry sauces but it’s easy to see why it suits Japanese taste being a bit milder than average. We had ours with a pork fillet that had been properly flattened fried in panko crumbs and then sliced, but there are also chicken and vegetarian options .

At night the interior is modified to allow more seating and there is going to be a delivery service soon apparently. Plus Tsuru has special evenings on an ongoing basis with events such as saki tastings (they are fully licensed) and music events with Japanese DJs and VJs.

There’s a nice vibe to Tsuru, a mix of Western marketing methods and Japanese attention to detail on the food side. The range of dishes is tempting and the price is right. Now we are no longer in danger of being blown off the embankment into the Thames when we walk along, we’ll be making the walk more often.