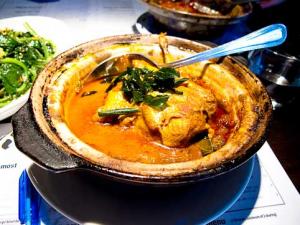 It’s a bit of a trek out to The Viet Grill – a tube to Liverpool Street, then a jerky bus ride up the Kingsland Road and into the badlands of Hackney. Apparently people do live out here though and when they tire of being artistic the Viet Grill is where they go to spend their dinner money.

Hackney has more than its fair share of genuinely good Vietnamese restaurants, a result of concentrated immigration a few years back when the area was cheap but not cheerful. The Viet Grill is one of the originals and, with the money that came from more affluent customers moving in, it has had a refit and gone, if not upmarket, at least beyond the formica tables of many of its local rivals.

The look is now colonial and rather elegant for the area; someone has put some thought into the design with mini-spotlights that hover over each table and give all the dishes Oscar winning lighting. They’ve also splashed out on a wine list created by my old copy boss Malcolm Gluck, which can’t have been cheap but will definitely be worth it. His nose for good wine and good prices is usually faultless.

Menus are placemats, so much easier to clean up after, and Viet Grill’s menu has little smiley emoticons next to Chef’s favourites/Traditional dishes so we let chef do the choosing by default. Beef Vinh was rolled chunks of spiced beef fillet, rolled in fact around small pieces of fat, and then charcoal grilled and served with a dipping sauce. The piece of fat was a bit odd, we took ours out and discarded it, but it did the presumably intended job of keeping the meat moist. The dipping sauce wasn’t all that exciting until, realising that all the main ingredients had sunk to the bottom, we tried stirring it. Once whizzed back together again it had far better flavours. 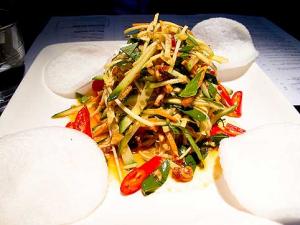 Mango Salad was a riot of colour, accentuated by the colour temperature of those crafty spotlights overhead. Crispy strips of sun-dried squid contrasted with the juicy sweet slivers of mango, crunchy crushed nuts and the unique taste of Vietnamese mint. A trickle of sweet chilli sauce drizzled through completed a remarkably vibrant and balanced dish in both flavour and texture.

Our next course was on fire. The waiter brought a claypot with pieces of catfish in it and then set fire to a puddle of what must have been lighter fluid underneath. In seconds the whole lot was bubbling volcanically and scaring the life out of me. In fact the catfish had already been slow cooked in a fish sauce, which was now caramelising in the heat as a last minute finishing touch. The fish had a melting, buttery texture and was extremely good; catfish has never previously impressed me at all. Oven baked mackerel was less successful for me personally because it’s about the only fish I have trouble with; it’s simply too strong a flavour and turns me up rather. J liked it though and happily picked away until it looked like a cartoon fish skeleton.

Quail curry had a good sauce, albeit reminiscent of an Indian curry sauce, I’d have liked some more vibrancy in there and okra is not my favourite vegetable, even though here it had been cooked properly to avoid that off putting sliminess. Quail is Chicken with an A level and whilst you have to battle with the bone to liberate every particle of flesh it’s well worth it. With it all we had some stir fried greens with rice wine and garlic and while not stand out they were pleasant enough.

The impression you get is of a kitchen that can do a lot and do it very well. I’d have liked to have tried the Wicked Crispy Frog as well as some of the Phos out of interest and in the spirit of research. They also do a goodly range of one pot meals, set menus and a ‘recession’ set meal too, although I suspect the locals these days aren’t short of a few quid, recession or not.

Upmarket refits often mean downgraded food, but in Viet Grill’s case they have simply moved with the market and set clear blue water between themselves and the tattier places and indicated who they want their customers to be. I’ll go back happily as long as someone takes me in a cab next time.