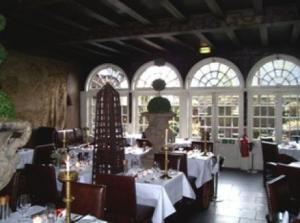 There’s nothing like starting your evening with an escort. By this, I don’t mean a pre-prandial visit to a lady of the night but instead having a man beat a path through a crowd to ensure that you make your reservation on time. The necessity for this bustling though was down to the Witchery restaurant lying only a few yards from Edinburgh Castle. During the month of August, the castle is the site of the immensely popular Edinburgh Tattoo. This event draws thousands of tourists who flock into the castle grounds to watch armies from all around the world parade in neat formation. Then, when this all finished off with a grand display of fireworks, the crowd troop out, filling the Royal Mile and thus requiring a steward to part the seas of poncho-clad spectators.

The Witchery gets its name from being the site of numerous witch burnings during the Middle Ages. Although the stakes have long been cleared, there remains a slightly eerie and stygian feel to the place as you descend the stairs. However, all thoughts of the dark arts are dispelled by the fantastic views the restaurant has over the Old Town.

The menu boasts a commitment to serving traditional Scottish dishes using locally sourced ingredients. This gave my companion the impetus to start with the well-known combination of haggis, neeps (parsnips) and tatties (mashed potatoes) as he felt he would be ‘getting the real deal”. I was keen to snaffle a small portion having only previously sampled haggis deep fried and lumped together with soggy chips, all from late night establishments found in the dank parts of Leith. I was impressed with how well it all combined together and how the haggis had a complex, nutty flavour to it.

My own starter of the fish soup with rouille and gruyere was decent enough if slightly straying towards being a little pallid. Although of a good texture, I felt that a touch more rouille would have evened the flavour out.

For main, I took the grilled cutlet of cross hogget (lamb no older than two years) together with spring vegetables and wild garlic. My companion was distinctly more ambitious, ordering the Three Little Pigs, which consisted of slow-braised belly, roast loin and grilled shoulder bacon, together with cider-glazed parsnips and apple sauce. For wine, we went with an Argentine Malbec, which went well with the meat. The hogget was served up just as young lamb should be; slowly cooked to achieve succulence and exquisite tenderness.

My companion was similarly effusive about his Three Little Pigs, although the sheer amount of meat left him insisting that a long period of rest should be maintained between main course and dessert.

When we finally got round to ordering dessert, my companion and I ordered the passion fruit and mascarpone trifle with pistachio biscotti and the lemon tart with raspberry sorbet respectively.

To accompany the desserts, we went for a bottle of Tokaji. This is a wine that I have wanted to try for a while but have always been too cowardly to order on account of seeming overly pretentious.

I was pleased with my choice of dessert as although the lemon tart was a little unremarkable, it was a good way to close out the meal and went well with the Tokaji. As for my companion, it is fair to say that he was overwhelmed by the trifle in both senses of the word. For although he kept on eagerly digging into the trifle, I was unsure whether he might be in the process of doing himself a mischief. But in the end, no ill effects came as a result of his gluttonous campaign.

In addition to the overall high quality of food and the magnificent views, the Witchery offers pretty decent value for money. Our two bottles of wine and a three course meal set us back only eighty pounds per head. The only problem was that on leaving the restaurant, we were left waddling down the Royal Mile like many of the tourists we had smirked at upon entering.