ComtÃƒÂ©, a semi-hard, nutty-flavoured cheese with a similar taste to GruyÃƒÂ¨re, is a favourite of mine but I’ve always had a romantic notion of how it was made: Milkmaids in gingham stirring silver vats of creamy milk, muscly lads in dungarees moulding cheese with weather-worn hands and the jingle of cow bells in the distanceÃ¢â‚¬Â¦ 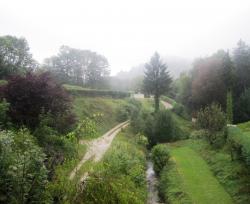 But on a trip to Poligny, a tiny Alpine town in North Eastern France, to find out the secrets of how ComtÃƒÂ© is produced and how to taste it properly, I realised I couldn’t have been more wrong.

ComtÃƒÂ© is steeped in tradition, having been made since the thirteenth century when locals in the Jura region pooled their milk supplies to make a cheese that would last through winter. Today, the locals still work together making ComtÃƒÂ© through a co-operative of 3,000 farms, 160 dairies and 16 maturing houses, but it’s now booming business and 58,000 tonnes are made each year.

The surrounding countryside might be quaint with its winding roads snaking up Limestone cliffs, verdant meadows dotted with pine trees and wooden chalets complete with pastel-coloured shutters, but there’s nothing rustic about how it’s made.

At a dairy in Plasne we enter a lab of whirring machines and vats the size of Jacuzzis. Sebastian Ozeree, who has been a cheesemaker for 20 years, shows us around. Milk is heated in the vats until it reaches the consistency of custard. Rennet, an enzyme, is added to separate the curds and whey before a machine cuts the curd into granules. 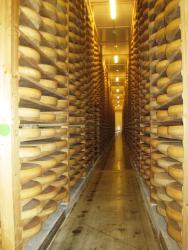 The mixture’s heated again so the curds clump together before they’re put in moulds that look like giant cotton reels, and compressed. The cheese is then stamped with the ComtÃƒÂ© logo and transferred to a cellar for three weeks.

For the final leg of the ComtÃƒÂ© journey, we go to Monts et Terroirs a maturing cellar, and it’s like entering a foul-smelling cheese-scented sauna. It’s 15 degrees centigrade, 90 percent humidity and my eyes are watering from the yeasty, ammonic scent of 2,000 cheeses.

But this is where the magic happens and ComtÃƒÂ©’s aromas develop. Each 50kg wheel has matured to form an orange, scaly crust which retains the flavour and moisture.

Sylvain Esselin, is the affineur, or maturing house’s’head chef’, responsible for ensuring each cheese develops the perfect flavour, texture and appearance.

Each wheel of cheese is put in a cold cellar before being transferred to the hot one that we’re in and then cooled again. The process takes between four and 18 months.

It’s Sylvain’s job to cover the cheeses in brine and turn them, something which used to be done by hand. A worker used to brush 320 wheels of cheese each day, but now it’s done by machine.

Sylvain takes out his testing sonde and hammers the cheese like a doctor tapping a patient’s knee caps, listening intently for a change in pitch which would indicate cracks to the paste inside. He pulls out a cone of cheese and offers it to me.

Given the nauseating smell, I’m not sure I can stomach it, but as soon as I pop a creamy chunk in my mouth, my tastebuds sing. This cheese is only four-months-old but has notes of cream, almonds and caramel. The process of making ComtÃƒÂ© might be smelly, but boy, it’s worth it.

ComtÃƒÂ©’s production is governed by strict guidelines to ensure the cheese retains its distinctive qualities: Each cheese must be made from a blend of three different milks, produced only by Montbeliard or Simmental cows. The cows must graze on an acre of local pasture and there are even rules about how their udders are cleaned. 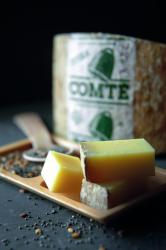 But conversely, no wheel of ComtÃƒÂ© will ever taste the same. The season in which the cheese is made, its age, the terroir that the cows graze on and the technique of the affineur mean that the cheese can have around 85 different aromas ranging from apricot, to white chocolate to tobacco, to leather.

At the ComtÃƒÂ© museum, our final stop, Taste Educator Claire Perrot, gives us different samples of ComtÃƒÂ© and shows us how to guess when they were made.

In the Spring and Autumn the cows graze on fresh grass and the carotene in it lends the cheese a darker and more orange hue. So cheese made in winter or summer is more likely to be pale.

More mature cheeses have a thicker crust and are likely to have crunchy crystals in them. These aren’t salt but tyrosine, an amino acid that forms as the bonds in the cheese break down during the maturing process.

With Claire’s guidance we pick out flavours as diverse as grapefruit, fudge, onions and almonds and then pair the cheese with vanilla then nigella seeds, both of which are hits.

The trip might’ve shattered my illusions of how ComtÃƒÂ© is made but it hasn’t dampened my love of it. I can’t wait to try out Claire’s tasting tips and know that when I next eat it, I’ll make every second ComtÃƒÂ©.