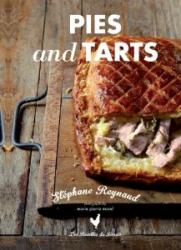 Is a pie really just a stew with a hat on? Some say pie crust was never meant to be eaten but was a way of lidding the dish to lock in heat and flavour. And let’s face it, many of the pies they serve in London pubs have puffy lids so tasteless they can only be lobbed to one side and forgotten.

But we all like pies don’t we; from the handheld variety to be waved aloft at football matches, to luxury en croute creations to wow guests at dinner. They are comforting, they are tasty and they are as British as queuing.

So here is a Frenchman, Stephane Reynaud, to raise the bar on pies, to show us new flavours, new shapes and, to be honest, some new and possibly etymologically unsound definitions of what a pie is.

He starts off logically enough with step by step instructions for making various kinds of pastry. It all sounds very easy but in my experience people can either make pastry or they can’t; so much depends on having cool hands and cool board to work on. But of course there is always ready made pastry to fall back on. So with pastry mastered or bought, it’s onto the pies themselves.

The cheese pies, each a French regional dish, are really so simple they are foolproof and while the sweet pies occu(pie) only a small percentage of the book’s overall pie plenty they are almost as attractive. I don’t have a sweet tooth, you see.

Over eighty pies in all, plenty to get your own teeth into and Reynaud, who has written many previous equally well researched and highly readable books, makes it all seem so exciting. Make a pie in the morning and you have a simple dinner for the night, one which a family can dive into. And thats the true meaning of pie.

365 Good Reasons to Sit Down and Eat