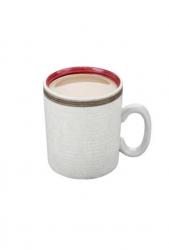 One of life’s great pleasures, at least for a Brit, has to be a big old bacon sandwich and a big old mug of tea. The bread has to be thick cheap white, no ciabattas or focaccias thank you, and the tea has to be proper tea, not some designer nonsense or some soppy tisane.

Of course getting decent bacon has become harder and harder over the years. What looks pleasingly plump in the packet, shrinks alarmingly on being cooked, leeching all kinds of white gunk out into the pan so that you end up with nothing but a travesty of a bacon sarny.

People of a certain age always say bacon isn’t what it was, personally I remember it used to have little white bones in it, which I a fastidious eater even at 11 years old, would pick out and flick under the table in disgust.

These days many children, and indeed many twenty-somethings, scream in horror if they are confronted with the reality of what meat really is and where it comes from, hence their passion for the anonymity of minced meat in various formats. So Denhay are probably doing the right thing by leaving those bones out of their bacon 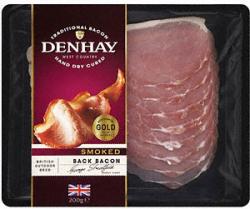 It’s advertised as dry cured with sea salt, hand-rubbed with the stuff in fact. Sounds good and indeed it tastes proper, the salt bringing out the meat’s flavour by drawing out the water. The other result of this technique is that you’re paying for the meat, not the liquid.

The size and shape of the bacon after cooking is pretty much the size and shape it was before cooking began, meaning you get a more meaty mouthful. And in other good news Denhay assure us all that the pigs were treated decently being outdoor bred and decently fed before meeting their end. All in all, the Denhay promise of proper bacon is borne out in the eating and I’d certainly eat some more.

Brown or ‘red’ sauce is a matter of choice; it has to be Heinz Tomato for me but we tried Tracklements Tomato Ketchup and frankly it didn’t work. It was a very high quality sauce and no doubt would be great for many things, but the vinegar acidity was too low for the primary purpose of layering into a bacon sandwich or globbing onto scrambled eggs. Some dishes need a bit of crudity and the Tracklements is too refined.

The mug of tea to wash it down came courtesy of Victory tea who’d sent a pack of 16 teabags to the office. Yes we blagged a freebie, so obviously anything we say about the tea will clearly be suspect. The fact that we liked the tea a lot will only add fuel to that holy fire for some people. However hand on heart we can say the fact that we didn’t pay for the teabags did not influence us in our duty.

You can’t actually buy Victory tea in the shops anyway. You can only buy Victory Tea in bulk and online.This can make it up to 50% cheaper than tea in the shops. Their Blend No. 1 that we tried is a black tea blended from East African teas and vacuum packed almost immediately after picking and foil wrapped for freshness, so it will last in the larder for months.

The flavour is traditional, again it’s ‘how it used to be’ before people invented circular teabags and pyramids and other kinds of gimmicks that, ultimately, make no discernible difference to the taste. It’s tea to drink out of a great big china mug, tea to drink after some terrible event as is the British way, our local anaesthetic. We liked it and may well get some bulk in for the office and cut our overheads.

If you want to try some for cheap, you can. Click here to order a Victory trial pack for just £1.50