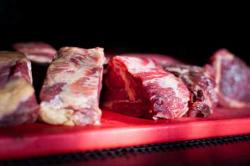 What’s a Greek urn? About 3 Euros an hour. What’s an Asador? Ah now you’re asking. Think a controlled bonfire, not the one your dad used to make from collected leaves and a squirt of petrol, the one that always made a satisfying ‘whump!’ as it set your eyebrows on fire. No this is very different.

Out on the Argentine plains, explains John Rattagan, his bald heat shining with perspiration in the fierce heat of the kitchen, an asador is a big wood fire where freshly killed and prepped lambs and other meats are mounted on ‘crosses’ and cooked over its flames. John and his partners have brought this concept to EC1 with restaurant A La Cruz where an asador made of polished steel sits proudly in customers’ view behind thick plate glass.

Argentineans love their meat; a day is not complete without it. Vegetarianism is not actually outlawed but you imagine it’s not encouraged either. John grew up in Buenos Aires and is steeped in meat culture. He opened Buen Ayre in Broadway Market in East London in 2004 and A La Cruz in 2009. 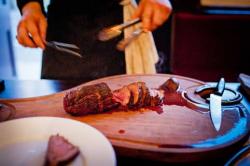 A converted pub in a previously neglected backwater, its interior is enlivened by fancy wall art and it’s a fresh, clean place. The asador burns brightly and next to it is a charcoal barbecue of the crudest kind, its cooking grill simply raised or lowered by a chain pulley. It’s simple but it’s also an art and head Chef Adrian Cocco keeps a close eye on it, manoeuvring steaks of all shapes and sizes, as well as plump chorizos and ribs, around carefully.

John wants us to feast heavily, as a small child he was always put in charge of the asador at family feasts and weddings, so he’s used to pushing the meat out. His cooks bring in a mixed plate of starters, wonderful Empanadas so similar to Cornish pasties and the pies of Galicia you know there are shared genetics. His have hard-boiled egg in them as well as spinach and beef, which is unusual but good. Thinly sliced beef sweetbreads Mollejas grilled over the flames need only a squirt of lime to make them extra special while Provoleta a dish of melted provolone cheese shows how the cheese magically changes character with a good grilling. 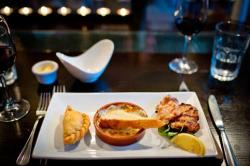 A Luigi Bosca Gala 3 2007 white wine was remarkable, I rarely rave over whites and was surprised to see a white served in this kind of restaurant. The aroma was heavenly and the blend unusual with Viognier/Chardonnay/Riesling grapes all in there to great effect. This is the white I want to drink on my desert island.

The meat marched in, a sampler of fillet and of ribeye steaks with Chimichurri sauce, that simple but effective sauce of coriander, lemon and in this case oregano, with a hint of chilli. Personally I don’t think you can improve on Dijon mustard, but hey when in Argentina…The meat was of course excellent, cooked fast on the outside and rare on the inside. These were sample portions but you could see how easy it would be to eat a great deal more especially partnered with the excellent Decero Peit Verdot Remolinos, Mendoza 2006 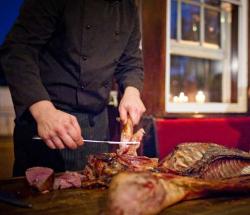 And then the lamb, triumphantly carried through the main restaurant to the Gala private room, awing diners on its way, and then carved on the spot. A perfect bit of meat with tender pink inside and the right crusted exterior. Lamb can be hit or miss sometimes, but this meat, carefully sourced in the UK by a la Cruz, was just right. So too was the Gouguenheim Malbec Valle Escondado 2006. We all know the Argenitians make great red wines, but sometimes you forget just how great. This was a reminder.

You’d think we could eat no more, but with John pouring wine like a man possessed we fell on the Panqueques: Traditional Argentine pancakes filled with Dulce de Leche and draped in honey. So rich, so fattening and so impossible to resist even for a non-dessert eater like me. 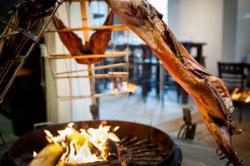 A La Cruz has certainly got the meat griddling thing down pat and are not dumbing it down with burgers, at least as far as I could see. There are plenty of fish options as well as a few vegetarian ones, although quite frankly this is still not the place to bring a veggie. The sight of naked meat may be offensive, even if they don’t eat it, and you know how they tend to whine.

They are genuine people at A La Cruz, genuinely trying to share their love of a particular cuisine and doing it very well. You need to go hungry to really appreciate it, maybe take a rugby player or two with you as its ideal for groups. The meat is magnificent, the wine list a treat. A La Cruz is on fire.

All photographs by Paul Winch-Furness