Run away to the circus? Nick feels he very well might after eating at Giffords circus. 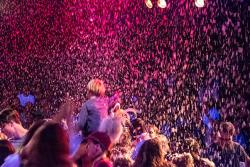 I’ve had some odd dining companions in my time but these people are particularly unusual. A clown, an exotic ringmaster (with a mysterious accent) and a charming chap  of’restricted growth’ and these are just the people nearest me. All around the tent are all kinds of exotic creatures and all, like me, are falling on the sharing plates of food with cries of delight.

This is Circus Sauce, a restaurant tent attached to a mobile kitchen; two large showmans’ wagons painted in Giffords Circus colours. The tent is candlelit, fitted with large oak tables and decorated all around with Giffords vintage tapestries and odd eclectic items. It is, on this warm summer’s night in the enchanted grounds of Chiswick House, a fabulous place to be. 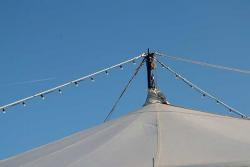 We’ve just seen the circus show in the big top a few yards away. A magical, classical show of the old school in a small, intimate space and one that sped by in ninety fun-filled minutes. The children in the audience were that rare thing nowadays, enthralled by something not on a screen. One minute they were screaming with laughter at the’business’ of Tweedy the clown, then they were silent with wonder, their mouths literally hanging open watching the jugglers and dancers. 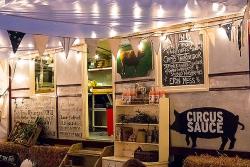 I’d love to tell you more about the show, but to spoil the surprises would be a sin. From the opening notes played by the apparently ramshackle, but really highly professional,’orchestra’ all dressed in motley, to the finale where a kind of dreamlike reverie occurs, it was a show to remember, the smell of the greasepaint competing with that of the cut grass from the lawns outside as an olfactory memory. 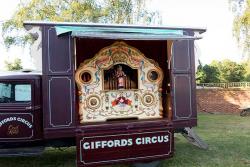 Giffords tour the country in the summer season, putting on their magical show and food on village greens and at similar small intimate locations. The wagons are vintage, the performers eclectic with a vaulting troupe from Addis Ababa, dressed in hats by Philip Treacy, jugglers from Ethiopia, an acrobat from Budapest and many more. The skills are ancient and hard won, yet up to date in a show directed by Cal McCrystal who directed episodes of The Mighty Boosh, so is no stranger to the unusual and illogically logical.

When the show ends, those that have booked for the £25 meal drift their way in the late evening light to the restaurant tent where excellent home baked breads are the first thing to be eaten,  as you share your excitement and compare moments with other diners and members of  the cast who come in to mix and mingle and eat. 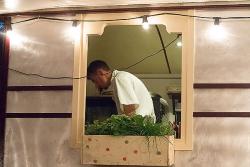 Deep fried balls of pease pudding containing hocks, cheeks and trotter are quickly consumed; crunchy outside and soft centered they are washed down with our own wine, Circus Sauce is not licensed so its BYOB. There are more than enough balls in the basket to go round sp I eat three, which was greedy but they were delicious.

Next, as darkness falls outside and our tent become even more cosy, there is crab thermidor; a whole crab shell for each person filled with luscious briny meat in a typical cheesy, creamy sauce. Excellent. It’s convivial, chatty fun and it’s grown-ups food too. 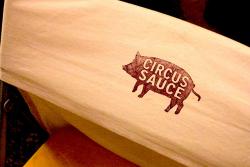 How do they do this for the money? Well apparently they forage wherever they go, they seek out local suppliers and even allotments for the ever changing menu, but even so this is remarkable value when you consider I paid £15 for a crappy burger, chips and a coke the other day (it was a distress purchase at a well known’posh’ chain). 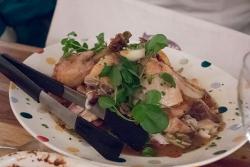 And as a main course, as if we needed one now, there is excellent roasted chicken brought to table in component parts with a fine light gravy and passed happily up and down the boisterous table, a brilliant and enormous garlicky gratin dauphinoise that defies our attempts to eat it all, and some sharp soused mushrooms. I feel like an extra in those wonderful barn meals that Hugh F-W puts on in his shows, except I don’t have to wear those odd clothes and keep cheering randomly. Although I do rather feel like cheering, as it happens.

Coincidentally enough the last course is like Hugh also from Eton, Eton Mess. It arrives in some style as the’orchestra’ sidle into the tent playing gypsy music in a beguiling, loose way that belies their honed skills. It’s a rich and creamy mess and I spoon it in wilfully. 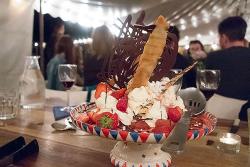 The party threatens, or seems to, be never ending but I ruefully wobble my way out the tent and through the park back to the real world. It has been quite an evening and a meal that I shall treasure for its simplicity, generosity and sheer flavourfulness.

I wish I’d taken juggling lessons, or been a clown, perhaps they will take me on as a tent assembler? But who will feed my cat if I run away? Ah well, one can dream.

The evening is wonderful, the show and food can’t be recommended enough. Book both as fast as you can

Giffords Circus is in Chiswick House Gardens until June 25th.