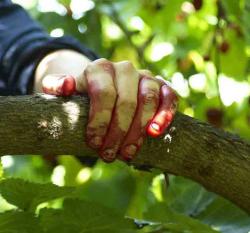 Sam Harrison is walking around a sun blasted garden in’leafy’ Chiswick looking like Macbeth after a particularly heavy night with the in-laws. His hands are running blood red; juice drips down his arms and gorily spatters onto the grass. He is a very happy man.

We’ve been up the Mulberry Bush, not around it, to gather the massive harvest of berries from a tree that’s at least 150 years old. Its limbs languidly sprawl all over the place, like an Old Etonian on a sofa, and under the canopy of leaves the berries are fruiting heavily.

For those who only know Mulberry as a designer shop, the Mulberry tree may need some explanation. A very widespread plant in Australia, its leaves are bizarrely the only food a silkworm will eat. Mulberry trees originally came to the UK when James I attempted to establish silk production in England by planting 100000 mulberry trees near to Hampton Court Palace 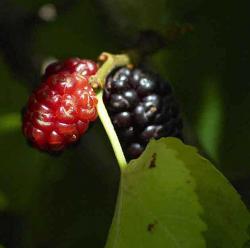 In fact silk is usually  the major use of a Mulberry tree (it has never been a bush, despite the nursery rhyme) and commercially they’re bred for maximum leaf production and not fruit. The example we’re under though has grown naturally to be a major feature of the grand garden it’s in and the berries are a bonus.

They certainly are to Sam, who runs Sam’s Brasserie in Chiswick. As he and his chef rummage about in the tree filling plastic boxes as fast as they can, he tells us he will quickly getting the berries back to base and into the kitchen.’I’m thinking a kind of Bakewell Tart’, he says indistinctly from somewhere over our heads.

Of course chefs don’t normally go foraging in private gardens. Sam’s allowed to do it thanks to the efforts of Sarah Cruz who is with us today. Her project, which she runs together with Karen Liebreich, is called Abundance and it’s all about selling the surplus fruit produced in Chiswick gardens to restaurants and shops. The profit made then goes to local schools. 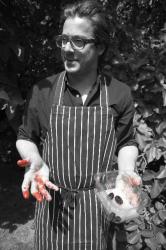 It’s a brilliantly simple idea. Money made from fruit, that would otherwise go to waste, helps educate children. At the same time people like Sam get to make delicious seasonal dishes for their customers with produce freshly sourced from less than a mile away.

And it is delicious. The Mulberry fruit looks like an oversized raspberry the size of a man’s thumb and the ripest ones have an incredible sweetness, as well as a light, almost apple-like, acidity. We can’t stop eating them as we go, but with thousands of berries already ripe and more to come, we barely dent what’s available.

Ã¢â‚¬ËœWe’ll be back for more,and soon it will be apples and pears and plums too,’says Sarah.’I LOVE plums,’ shouts Sam who’s still up his tree if not out of it. The owner of the house wanders past and Sarah hands him a Mulberry. 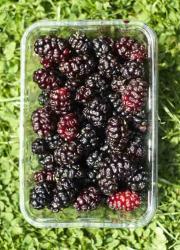 He’s very happy for Sarah and Sam to take all they can, his tree produces more than any family could ever eat and the berries don’t freeze at all well. In fact if not harvested they can become a nuisance, carpeting the grass and staining everything in sight. Indeed none of us has escaped without blotches of bright red on our clothes.

Laden with boxes and boxes of fruit, we leave the house. Sam gets on his scooter and promises to send a recipe, Sarah peddles off to the Brasserie with her trailer full of produce. It’s been a berry good morning for everyone.

If you have an abundance of fruit in the Chiswick area, or would like to volunteer to help with picking other peoples’, making jam or helping with school trips, get in touch with Sarah or Karen via the Abundance website.

Eat at Sam’s Brasserie in Chiswick