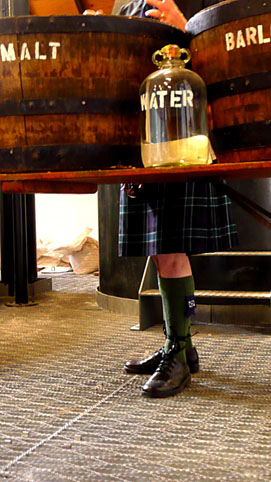 TV Presenter turned ‘Godhead’, David Icke predicted that by Christmas 1991, great earthquakes would obliterate Cuba, Greece and the Isle of Arran. Despite evidence of volcanic activity some 60 million years ago, I am glad to report that my recent visit to what has been branded ‘Scotland in Miniature’ proved his prognosis ‘marginally faulty’.

I had fled the decadence and grit of capital life from City airport’s Americano-scented terminal. Compared to the barely disguised frenetic energy of well-fattened business bods hovering get richer boss porn in the bookshop, Arran provided a peaceful antidote. Located within the Firth of Clyde, between Ayrshire and Kintyre, the island of glens, golf and no grey squirrels is just 19 miles by 10. In summer, the population of 5,000, which is spread over 15 villages, swells to 20,000 – not that you’d ever feel in a crowd unless you attempted a purchase at the island’s busy toiletry firm, ‘Arran Aromatics’. Go there to inhale the sweet smell of success.

The varied landscape makes it a geographers paradise, attested to by web site, ‘Arran Fieldtrip’ which makes the catchy claim: ‘excellent composite intrusions display a suite of cogenetic, igneous rocks…’ Exactly. Sports fanatics can swing their clubs over seven golf courses (avoiding roe deer lawnmowers), or sea kayak, cycle and mountain trek. The most interesting of these protrusions vaguely mimics the image of a warrior sleeping on his back, whilst the highest, Goat Fell, meaning ‘Mountain of Wind’, rises to nearly 3,000ft. The latter was the scene of a gruesome murder in 1889 when, the story goes, a Scotsman and an Englishman went up a hill and only one came down alive… 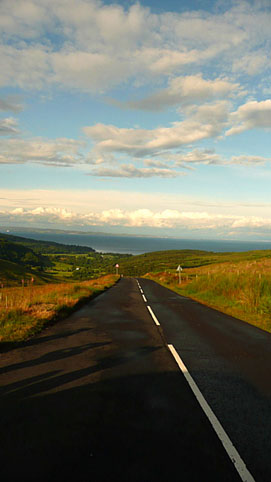 Historians can explore pristine royal and artfully ruined castles, like Lochranza, which looks like a giant has bitten off its ramparts. Amongst the rowan trees and rhododendrons, there are Iron Age forts, Cairns and mysterious standing stones which David Icke might interpret as a cosmic ‘power-point’. Robert the Bruce allegedly waited out the dour winter of 1306 in the ‘King’s Caves’ after a devastating first year as King. Apparently he was so inspired by an inept spider’s indefatigable efforts to maintain a web against the slippery cave wall that he summoned resolve to continue his campaign against the English. No doubt he would turn in his cairn if he knew that 60p/c of Arran’s present day population is formed of those whom he secured independence from.

But aside from fells and forts, what is there for journalists?

’20 years ago there were 42 pubs – now there are just 13′ advised taxi driver, George to our lively and curious press pack, gathered from all-over the U.K. including an Englishman, Irish(woman) and a Scotsman… Sensing disappointment, he added, ‘that’s including the ones in your hotel!’

We wound along the 13mile ‘string road’ from main town, Brodick where (sounding like an anti-seasickness pill) the ‘Calmac’ ferry had docked, towards Blackwater’s Best Western Kinloch Hotel. Palm trees grow here thanks to the same gulfstream that enabled exotic flora to flower in that great British horror, ‘The Wicker Man’. Rather than ‘Corn rigs and barley’ and ‘The Landlord’s Daughter’, noting breathtaking views towards the Mull of Kintyre, my inner stylus settled on Wings’ greatest hit, set to loop for the entirety of the three-night stay. 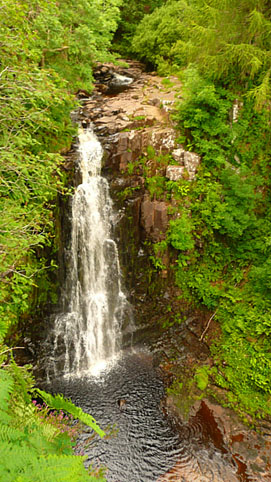 The following day, as others got wet and blistered sea-kayaking, I accompanied a young lady with a suspiciously timely fear of seaweed on a 2½ mile slalom of a walk through sweet smelling pines. We wove past Neolithic burial chambers towards one of the island’s most beautiful sights, the Glenashdale Falls. It was hardly Iguassu, but graceful nonetheless. Our guide, Martha, daughter of famous food writer Nichola Fletcher (‘Charlemagne’s Tablecloth: A Piquant History of Feasting’) revealed a nose for finding delicious, minty sorrel, which look like clover, and damp-loving, purple bilberries. At the gurgling basin at the top, I sipped the cool, dark peaty water, a vital ingredient for the drinks raised on the island.

Breaking a gap of 160 years, the stills of Arran’s only legal distillery were fired-up in June 1995, breaking a dry spell of 160 years. It would take another three years and a day for the barrel aged spirit to be technically recognised as Scotch. I was particularly impressed with their rich, cask strength (55%) ‘Sassicaia’ Wine Cask release – finished in barrels from Italy’s sexiest Super Tuscan wine.

Apparently, when the Queen came for the opening day, a pair of golden eagles, which nest nearby, did a fly past. Our kilted guide explained this as a thank you to builders forced to halt construction whilst chicks were hatched. When I asked where they were on our visit, he wryly offered to ‘get their remote control out’.

Naturally filtered through granite, pure, plentiful water is drawn from Loch na Davie. Curiously, the most striking characteristic of its taste, peat, is considered undesirable, never making it into the finished product.

The owner of Arran’s brewery prefers the water exactly as it is. Whilst this young brewery was founded the same year as me (1980), beer has actually been made on the island for more than 4,000 years. I liked their nutty ‘Red Squirrel’, a special brew which raises funds to build ‘rope bridges’ for the rouge rodents. Rather wickedly, I wondered what effect a front-page photo-shopped image of a grey squirrel doing battle with a red would have on the local rag’s letters page. 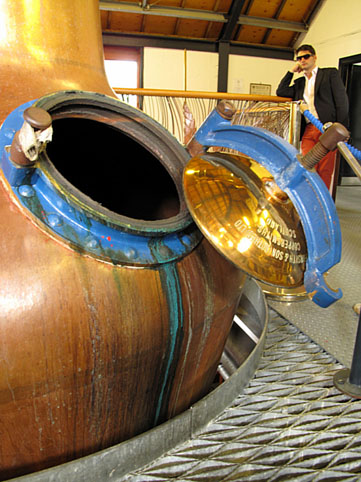 Gastronomically speaking, whilst Arran rhymes with barren, the island has surmounted food as fuel and is a larder of game from the Glorious Twelfth, waxy Arran Chief potatoes, shaggy looking but hardy highland cows (or ‘coos’ as George put it), black and white face sheep living in harmony and fathoms of fish.

Good restaurants I encountered included the ‘Brodick Bar’ and ‘Wine Port’, owned by the same area man impresario who review sites describe as ‘exceptionally rude’ (although I found all staff disappointingly mild). From a blackboard menu, well-executed dishes rather exotically fused Mediterranean, Japanese and British genres with pretty touches like edible nasturtiums, although a décor seemingly constructed from squares became a tad tiresome.

The best and worst food moments occurred at what was the island’s busiest farm, since gentrified into a cute shopping site. To describe a couple of shivering operatives adding 13 flavours to imported Cheddar as a ‘Cheese Experience’ was perhaps an overstatement. But the medley of cooked seafood at ‘Creelers’, opposite, more than made up for it. This small fish restaurant with enthusiastic amateur paintings and murals is bolted onto a smokehouse. It gets its name from the creel cages used to catch what you crack.

From the Arran Chocolate Factory nearby (actually, nothing is ever far), I ate a large proportion of my weight in ‘tablet’, best defined as being like toffee, but not as chewy, and like fudge, but more grainy. A guide to the popular treat praised it as ‘a wee bit of heaven in an otherwise dreich country.’ Apart from Champagne and ginger truffles and the obligatory whisky centred ones, I found it amusing to see names born out of exasperation, e.g. ‘the raspberry one’. 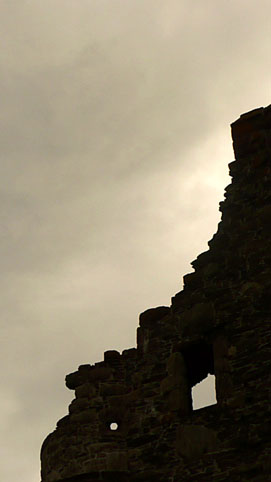 After a rather sleepless night owing to George’s sombre tale of a headless ghost followed by a midnight walk, it was time to return. On the 50minute ferry journey back to one horse town Ardrossan on the mainland (it makes up to a dozen crossings a day), we passed the tiny Holy Island, currently owned and occupied by Lama, Yeshe Rinpoche. It took him almost a decade to raise the £350,000 needed to buy it (reduced from £1m) after receiving ‘instructions’ during ‘dream yoga’ to re-establish it as ‘a place of harmony’. Visitors are requested to follow ‘five golden rules’: refrain from killing, stealing, lying, intoxicants and sexual activity that causes harm. In other words, advertising executives aren’t welcome.

Noticing a fellow passenger from our group shell one from silver foil, which looked like lame, I was chided for not having ever tried a Tunnock’s Chocolate Mallow quoit, made south of Glasgow. But as I put the biscuit-based, marshmallow-stuffed, chocolate-covered morsel into my mouth, I sensed a kilter in the ferry. ‘You’ve eaten so much you’re tilting the boat’ said a cool voice nearby.

Whilst convenient, flying back from Glasgow didn’t allow a gradual transition from island time back to London time. Watching the luggage carousel unfurl its cargo, initially evocative of a sushi belt, I did begin to miss Arran. It is true that we had been spoilt with splendid weather – that weekend almost all of the rest of the U.K. had received the pity of God’s tears. Regardless, even if there had been rain, I would still have appreciated the fresh, green beauty of an island remarkably unscarred by people, despite the fact that they have inhabited it for more than 10,000 years.

For more information on planning your perfect break to Scotland, visit: www.visitscotland.com/perfectday