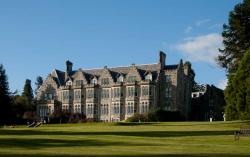 Country houses are all the rage, what with Downton making us sigh with longing. Nick Harman gets a fix of old school class at Ashdown Park Hotel

With a flourish the waiters whip off the cloches to reveal the meal beneath, a sight not seen in London since barrage balloons wobbled in the sky and Evelyn Waugh wobbled out of Whites. You can only imagine what some metropolitan critics would make of this; gleefully sharpen their pencils in preparation for stabbing the restaurant through the heart, no doubt. 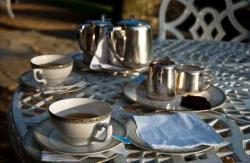 Things are done differently in the country though, they hunt things, they kill and mostly eat the things they hunt, they are comfortable with corduroy and welly boots and mud. Here at Ashdown Park Hotel and Country Club part of the same Elite Hotels Group as The Grand Eastbourne.  some things are still done pretty much as they would have been done thirty years ago. 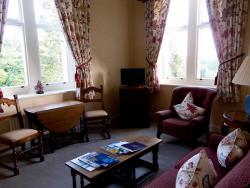 The hotel is, as are so many, a converted country house but it’s a converted convent really. In the 1920s an already pretty large place was bought and added to by rich nuns, grand wings sprouted from both sides and a chapel was tacked on. Then came a spell as an American’university’, then a training college for a major high street bank. Finally, around 1993, it became a hotel, club and spa.

It’s size means our journey from reception to suite takes forever; the endless fire doors that encumber each and every corridor making it seem longer. The suite’s smart though; a double aspect sitting room looking out onto rolling downs and a lively fountain. This and a large bedroom furnished with genteelly distressed furniture makes it feel like we were spending the night at Downton as family guests of the perennially sad Earl. Only the flat screen TVs in each room break the spell. 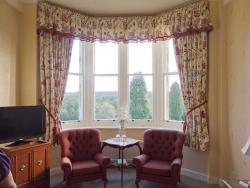 We’re here for the  annual Sunday mushroom foraging and lunch, but on this Saturday evening it’s also a chance to try the restaurant too, so we yomp the corridors, descend the wonderfully creaky grand staircase and enter the 2 AA Rosette restaurant; Anderida.

Except I don’t. Sir is wearing neither tie nor jacket and is swiftly intercepted. Ã¢â‚¬Å“I told you!’ hisses the wife. The Maitre d’ is good about it, he produces a jacket,’carry it over your arm,’ he advises,’then hang it on the back of your chair.’ Am I enraged by this? No I am just a bit embarrassed as, after all, it was clearly stated beforehand both on the website and in the room. I am not an iconoclast and when in Rome, or when in East Sussex, one does what the Romans do. 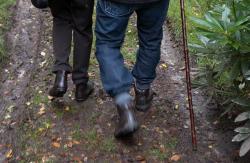 Like the cloches, this is a hangover from a better age, one when a gentleman did not need to be told to dress properly for dinner. It may make trendy young, and not so young, Londoners choke over their napkins made from kitchen roll,  but from the look of the packed restaurant with its heavy drapes, warm candlelight and tinkling piano, it doesn’t upset anyone else. 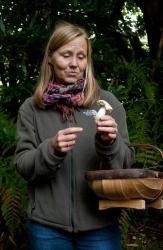 The food looks the part, once cloches are removed. Head Chef, Andrew Wilson is not serving dinner from the dark ages and my Supreme of Local Partridge, Leg Croquette, Creamed Parsnip, Potato Terrine (complete with authentically crunchy bits of shot), is well-cooked and presented with bags of flavour. This was good as the starter of Sweet and Sour Duck Terrine, Crispy Won Ton and Pineapple Textures had read well but lacked sufficient seasoning and distinct tastes. P’s Salmon and King Prawn Filo Parcels, Fennel PurÃƒÂ©e, Aioli could have had the power turned up too, especially on the aioli, but her 38 Day Aged Fillet of Beef Wellington from Lamberhurst, with Dauphinoise Potatoes, Roasted Shallots, Aubergine PurÃƒÂ©e was very good, suggesting chef works best when he works using good local produce.

Off to enormous bed we went then next day down to a breakfast looking out onto the vast grounds and golf course. We have mushrooms with our full English, just in case, then boot up for the coming search under the expert guidance of groundskeepers and mushroomologists. 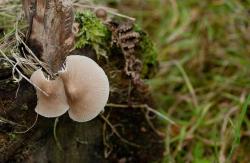 It’s fun. The secret of ‘shrooming is to keep your expectations as low as your gaze. Adults and small children alike rummage cheerfully around the ferns and foliage as we wander in a group through bosky woodland, grassland and lakeside.

Mushrooms are found but at best are inedible, at worst dangerous.’Dinner or death’ our guide cheerfully remarks. The weather has not been kind this year but remains of the sought-after cepes can still be seen, a clue that it mostly depends on luck, although many mushroom hunters hunt by the phases of the moon. 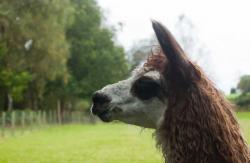 Surreal site of the day is a herd of Llamas who wander over to to flick their funny ears at us, but thankfully not spit as they often tend to do. They look like aliens in the English countryside, a cross between camels and sheep, yet really rather sweet and endearing. 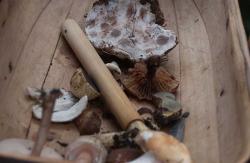 A pleasant hour or two passes as we walk and chat and listen to our expert guides. Then it’s back to the hotel for the grandgourmet mushroom lunch in the old chapel, our boots shucked off and most of us are secretly only in our socks under the linen laden tables.

Beneath a luminous fried duck egg and walnut oil is a thick carpet of mixed wild mushrooms on toast, a brunchy starter. The mush are slippery and varied, each with its own distinct flavour and breaking the egg and letting it puddle through creates a tasty mess. 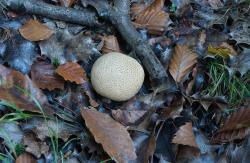 Next pot roasted ox cheek with mushrooms en croute and a truffle and parsnip puree. Some find the cheek too gelatinous for comfort, must be Londoners we snidely remark. The meat is tumbling to the fork, the truffle puree not too assertive. Then a suitably classic steamed orange and ginger sponge pudding with clotted cream ice cream and an almond tuile leaves us puffing in our chairs. And with coffee it was check out and car time. 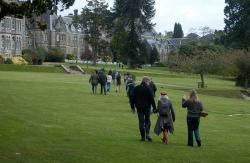 The problem with these country house hotels is that as you return to London the increasing density of housing is depressing after the aristocratic acres. How, you wonder, can we live in such tiny places.

It may be all wrong for some that these grand houses were created in the first place, but they served society as a small world of employment, status and self-respect for all who lived and worked in them.

Now as leisure machines they do much the same thing, but in Ashdonw Park’s case, happily under cloches.