‘Some real ale fans come into the place, freeze and double take. They think, because they read about it in some dusty out of date beer guide, that it’s still a pub. They stand in the doorway for a bit looking confused and wondering whether they can still get a pint of Old Frogbasher!` Ben Tish, Executive Head Chef at Opera Tavern shakes his head with amusement.

You can partly understand the ale fans’ confusion though. From the outside the Opera Tavern looks like the pub it used to be while inside there is still a long bar. That’s where the resemblance ends though, because down at the far end instead of a sweaty ham roll in a perspex box there’s a beautiful leg of Pata Negra with one of the staff carefully carving wafer thin slices onto wooden boards. 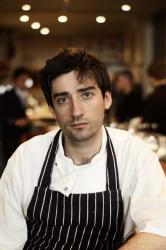 ‘We go through two to three legs of that a week,’ says Ben, ‘it’s five years aged and lovely stuff. We went to Spain and chose it ourselves in taste tests. We bought a batch and now it ‘s sent through as we need it. We serve the slices about 50:50 meat to fat ratio because the fat is so delicious. The guys carving learnt how to do it properly after being taught how by a professional carver. You can’t afford to waste this stuff.’

And just as in Spain the scraps that do inevitably accumulate are given a good send off. ‘When we have enough we use them in a ‘special’,’ says Ben. ‘Maybe a tortilla, or in the classic way of course in a croquetta. Delicious.’

Opera Tavern is the latest opening from the people behind the very successful Salt Yard and Dehesa restaurants. Ben has transferred over from Salt Yard to use his skills to make it a success and in fact it already is. The mixture of reservable sit-down dining upstairs and bully-up-to the-bar traditional tapas downstairs, meets the needs of all kinds of diners, from urban trendies to out of town theatre goers, especially in an area often only too well known for tourist rip offs.

‘We open at 5pm in the evenings, so we do get the pre-theatre crowd looking for a quick bite and when Shrek opens, ‘ Ben gestures toward the theatre opposite,’ then it should be even busier. Mind you, down here in the bar it’s already heaving most nights.’ 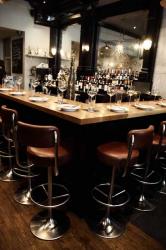 Although Opera Tavern has a full-on kitchen made from the old beer cellar, ‘we had to excavate quite a few feet before it was big enough to stand up in,’ Ben laughs, the star is the robata grill in the bar. From here staff send out flurries of pinchos, little skewers of meat, and the already famous Pata Negra burger with foie gras. ‘The simplest cooking methods are often the best’, as Ben points out.

Ben has a real fondness for the grill. ‘I went to Extebarri in Spain where chef Victor Arguinzoniz cooks just on grills and almost nothing else. I heard it was a great restaurant and for once it lived up to the hype, because so few places do, do they? What makes this place special is that it’s in the middle of nowhere, you have to get a taxi out, and when we went there it was a gorgeous day and the restaurant backs onto this cliff, well it’s a small mountain really, with sheep dotted all the way up to the top. It was idyllic’

And of course the food ‘Oh yes, they cooked so simply, everything off the grills that chef builds himself. They’re these contraptions with pulleys so that the grill can be lifted and tilted for complete control of the cooking. We had oysters cooked for two hours in a low heat, so they stayed soft and the seawater inside had gone all foamy. We had a simple Galician steak with a green salad which was amazing, the incredible percebes simply grilled so that they really just steamed themselves and chargrilled eels too, which I love. Great ingredients treated simply but well.’ 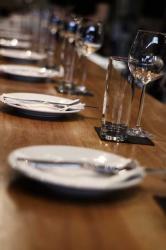 The grill at Opera Tavern is a main focus too, Ben explains. ‘Here at Opera I like to think we’ve stepped it up a notch from previous because we have a bigger kitchen to do more in and we have a whole menu section based around the grill. Thats proved to be really, really popular and we’re going to develop it as time goes on. We’ve also brought over some of the signature dishes from the other restaurants, pork belly, courgette flowers, that sort of thing. In fact we have to have the flowers on all year round as they’re so popular. We get them mostly from South West France, occasionally they come from Israel, and we stuff them with Montenegrin goats cheese a Spanish goats cheese which holds its shape but is still soft.’

Another popular dish is crispy squid. ‘ Yes, the crispy squid flies out. The salt cod we salt ourselves and the veg dishes are very popular, we get a lot of vegetarians in because we do a lot of choice for them, but then tapas is so good for offering choice, a vegetarian tapas isn’t a side dish promoted, it’s a dish in itself’

‘We do some standards, like patatas fritas but we make it special, with the potato cooked in olive oil, that sort of thing. More refined. There’s also the Italian influenced dishes too, plus things like Migas, breadcrumbs fried in oil that’s a recent addition.’

With that Ben is told by his team that the grill is now hot and so it’s time for him to do the demo as seen above. The lunch time service starts in an hour and the Opera Tavern is ready for another impeccable performance.