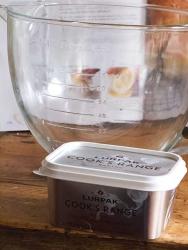 Mary Berry, don’t you love her? Everyone’s favourite stern aunt so full of love and patience for her nephews and nieces,’get off that sofa at once Nicholas, you will break it!’ and always ready with a Tupperware box containing delicious home-baked cakes.

In my house we have a lot of cookbooks, as you might imagine, but the most dog-eared are the ones by Delia and Mary simply because their recipes work and are seldom let down by incompetent editing or basic errors.

Baking is of course what Mary has always been most famous for, even more so since she started appearing on the TV next to Paul Hollywood whose moist sultana eyes seem to twinkle even brighter when she praises him.

So it was to Mary that I turned when testing out the last of the Lurpak Cooks range of butters we were gifted, one designed primarily for baking and called, perhaps unsurprisingly, Lurpak Baking Butter.

Now anyone who has, of a wet and miserable Sunday afternoon, suddenly decided to bake has invariably hit the butter snag. It’s too hard out of the fridge and faced with the choice of leaving it out to get soft or taking the risk of melting it entirely in the microwave, one tends to put it back and wander off to the sitting room to see if there’s a decent black and white war movie on.I like the ones with model boats tossing on a Pinewood sea and a young Attenborough almost invisible in his enormous overcoat best myself. 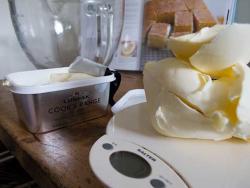 Lurpak Baking Butter comes in a tub, just like margarine, and is just the right consistency. Rather like something from Goldilocks it’s not too hard and not too soft. The reason is that it is not pure butter but butter mixed with rapeseed oil so the fridge has no effect.

Lurpak has of course always been a first choice with bakers, its colour makes the results creamy looking and it has no salt. I lobbed the required amount into the mixer along with all the other ingredients for a Lemon Drizzle Cake from Mary Berry. 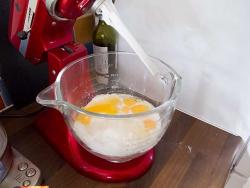 One can of course mix by hand, it’s the hipster way. Perhaps even using some kind of clockwork contraption if you want to earn extra style points, but I use the Kitchenaid because I’m a retro-hipster. And lazy. Within moments the ingredients had become smooth and luxurious; thick enough to cling to the beaters when lifted out but with enough air and lightness to fall indolently off a few moments later. Perfect. 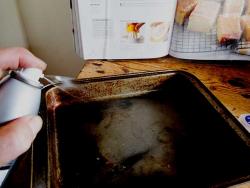 The mix flowed like creamy lava into the tin( pre-greased withLurpak Cooking Mist), settling to find its own level. After that it was into the oven to bake and then, after stabbing it all over with a fork, a molten mixture of lemon and sugar was poured on top and the whole thing left to cool. The same fork was then employed to ward off family members trying to get a preview piece.

You need an expert to assess these things and my own favourite aunt is 87 years old and a veteran church goer. She’s attended more church bake sales to raise money for charities and missions than possibly anyone else in the county and she does love her cake. So putting my Lemon Drizzle into a Tupperware box, as form demands, I took some round for the ultimate test. At 87 my aunt no longer feels the need to spare anyone’s feelings and is a great believer in honesty and speaking her mind. In fact she’s just the sort of matriarchal English aunt beloved of authors such as Saki and P.G Wodehouse.

She served the cake alongside tea in cups and saucers – I don’t believe my aunt has ever owned a’mug’ – and said she was impressed with the lightness and the moistness while we both agreed I could have used more lemon zest. I had made a lot of cake as I couldn’t do the maths to halve the recipe (whats half of three eggs?) so aunt claimed it all and said she would serve it to the church elders who were coming round later. Apparently it went down very well.

Lurpak Baking Butter, it’s not quite butter but I think it’s better than butter. And cheaper.