Tracy learns about the flavours of London gin, by way of the MediterraneanÃ¢â‚¬Â¦ 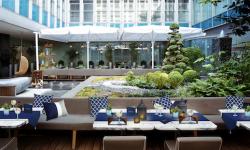 It seems that gin has been the nation’s favourite for centuries Ã¢â‚¬â€œ along with binge drinking, that is. Apparently, in the 18th century, each adult in London consumed around half a pint of it per day, which possibly explains its nickname of Ã¢â‚¬Å“Mother’s RuinÃ¢â‚¬ÂÃ¢â‚¬Â¦ Then in the 19th century, the gin and tonic was created. Not by some forward-thinking barman, but by the British soldiers stationed in India who, at risk of malaria, added quinine to a mixture of sugar, lime juice and gin Ã¢â‚¬â€œ and voilÃƒÂ , medicine became the precursor for a much-loved cocktail.

We’ve come a long way since then (thankfully, the gin available today has no turpentine or sulphuric acid added to it!), but it seems that the exploration is far from over. Bombay Sapphire, in association with the Sanderson hotel in London, is hosting The Gin Journeys until 15 October, which takes tasters on a sensory trip through the areas (such as the Mediterranean, Morocco and Indo-China) from which the botanicals used in the making of Bombay Sapphire (inspired by a recipe dating back to 1761) are sourced. 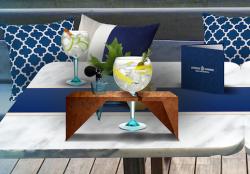 Every Tuesday and Wednesday, you can enjoy a complimentary 45-minute Signature Sensory Serve with Bombay Sapphire brand ambassador, Renaud de Bosredon. This is a’journey’ designed to heighten the senses to the worldly influence on the drinks. There are ten botanicals used in the gin, ranging from the familiar such as juniper berries, almonds, coriander and lemon peel, to the more exotic, such as cubeb berries from Indonesia that is part of the pepper family and provides a’dry, hot flavour, which lingers on the tongue’, and angelica, part of the root of a flower that brings’an earthy tone to the gin while balancing the other botanicals’.

These sessions will expose you to three of the sensory serves. We sampled one Ã¢â‚¬â€œ the Mediterranean serve. This involved a small glass of neat Bombay Sapphire, and another with a cocktail made from almond syrup, fig jam, orange water and gin, of course. Then there was an atomiser, filled with coffee extract, and a spoonful of salted caramel.

Renaud then took us through the tasting Ã¢â‚¬â€œ first the virgin gin, then the slightly bitter cocktail. A spray of coffee extract on our tongues and it was back to the cocktail for another sip (the idea behind it is for it to heighten the complexity of the different elements). This time the taste was a lot mellower, and after the salted caramel, it was completely changed Ã¢â‚¬â€œ being now not only smoother, but sweeter too, with Renaud pointing out that the notes of citrus peel and juniper, which apparently comes across as a taste of pine. But perhaps I misunderstood and that was meant to be the smell of pine, as I’ve never had the inclination to chew on a bit of my Christmas tree, no matter how festive it looksÃ¢â‚¬Â¦ 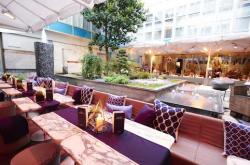 Either way, I had to take his word for it because, while I could detect the flavour change of the cocktail, my taste buds might be more of the plebeian variety when it comes to the individual components… Unlike a food dish, when I want to know every single ingredient that has gone into it so I can attempt to recreate it at home, I have no such desire to distil spirits for my home use, so the subtle nuances of individual flavour usage, while interesting, is a little lost on me. If you point them out, I might be able to distinguish them, but I’m just happy for it to be an enjoyable cocktail.

And there are a number of those available, too (in the Ultimate Gin & Tonic experience) served in large fishbowl glasses with complementary light snacks. We tried the Riverbank Tonic, described as’a floral, peppery twist on an uplifting classic’, with the flavours of’watercress and violet’. Matched with a canapÃƒÂ© of Prosciutto, peppercorn, watercress and violet salad, the first sip of the Riverbank tasted quite potent, but then it finished on a sweeter note, with an overwhelming taste Ã¢â‚¬â€œ for me Ã¢â‚¬â€œ of Parma Violets.

The Jakarta’s Cure was said to draw on’both sweet and spice, typical of Javan cuisine’ and combined walnut bitters with tamarind and carrot juice, and was served with a snack of Queenie scallops, tamarind butter and coriander cress. The vibrant colour from the carrot juice meant my taste anticipation was for sweet, but the reality was instead one of delicious bitterness, in the same vein as an Aperol spritz. Wonderfully tart and refreshing, it was my favourite Ã¢â‚¬â€œ although my other half proclaimed it to be’utterly revolting’Ã¢â‚¬Â¦ which meant more for me, and that at least I have a fellow companion when it comes to those pleb taste buds!

To book a Gin Journey or for more information, email ginjourneys@bombaysapphire.com